Home > Back to Search Results > One of the best "Wrongway Corrigan" issues...
Click image to enlarge 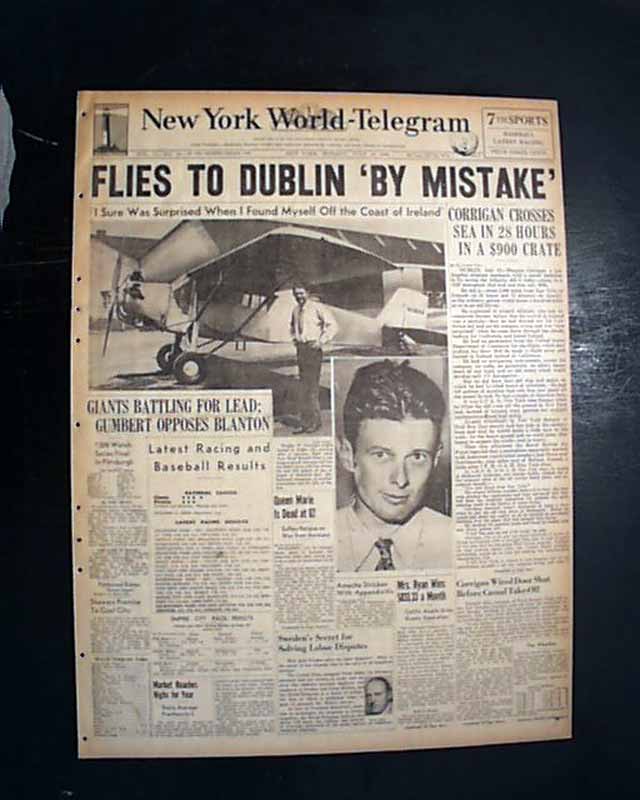 One of the best "Wrongway Corrigan" issues...

This is one of the best "Wrong Way Corrigan" issues we have offered, featuring a banner headline: "FLIES TO DUBLIN 'BY MISTAKE' " and subhead: "Corrigan Crosses Sea In 28 Hours In A $900 Crate". There are also two photo headed: "I Sure Was Surprised When I Found Myself Off the Coast of Ireland".
Pages 2 & 3 have a banner headline stretching across both pages: "Corrrigan Phones For Flying Weather to California and Then -- Gasses His Plane; Cranks Her; and Turns Up Next in Ireland". There are an additional 8 photos relating to this with additional articles.
Daniel Corrigan became known as "Wrongway Corrigan" for this mistake, thought by most to be intentional as he had been denied permission to fly to Ireland.
Complete in 26 pages, small date stamp in the masthead, small binding holes at the blank spine, great condition.