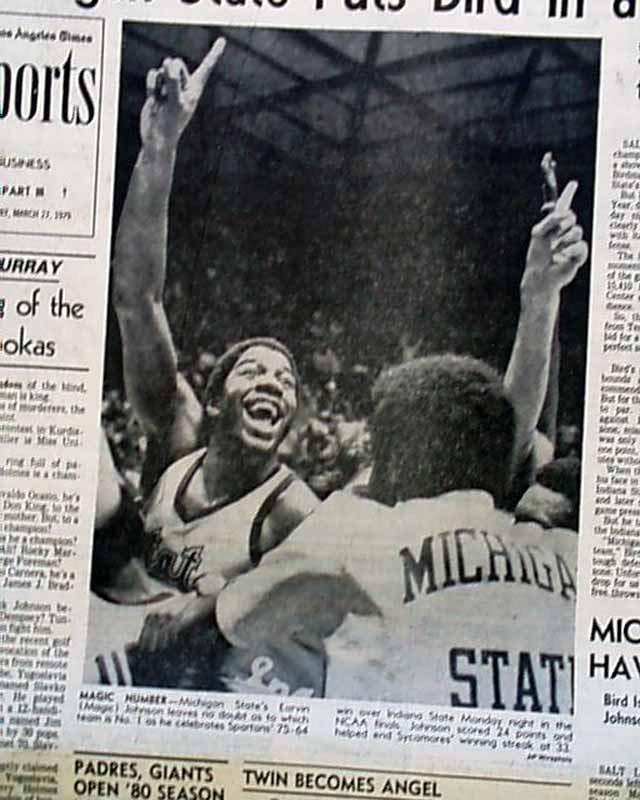 
LOS ANGELES TIMES, California, March 27, 1979  The 1st page of the Sports Section has a banner headline related to the highly-anticipated showdown between Earvin "Magic" Johnson, of Michigan State, and Larry Bird, of Indiana State, in the NCAA Championship: "Michigan State Puts Bird in a Gilded Cage", with subhead: "Spartans' Zone the Key to NCAA Title, 75-64". Below the headline is a large photo showing "Magic" Johnson with his classic smile and his index finger raised to the air declaring Michigan State as the number 1 team in the NCAA. A second article is headed: "MICHIGAN STATE PAIR HAVE THE FINAL WORD." Bonus coverage with additional photos are found inside the Sports Section. See images for details. It is great to have this coverage from the city who would make Johnson, who was awarded as the tournament's Most Outstanding Player, the numbe1 player selected in the draft only a few weeks later.
The front page also has noteworthy content related to the Mideast Peace Treaty. See images.
All major sections are believed to be present, but the issue is being offered for the described content. Even toning, some wear along the left spine, but in overall good condition.