Home > Back to Search Results > Brazil declares war on Germany in 1942....
Click image to enlarge 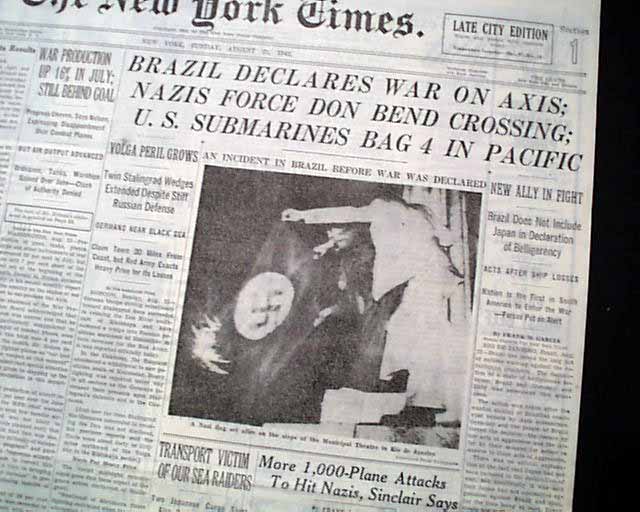 The front page has a five column headline: "BRAZIL DECLARES WAR ON AXIS" with subheads that include: "New Ally In Fight" "Acts After Ship Losses" and more with related photo.
Other news of the day with much more on World War II. Complete 1st section only with all 44 pages, rag edition in nice condition.

wikipedia notes: The Brazilian Expeditionary Force or BEF was a 25,300-man force that the Brazilian Navy, Army and Air Force formed to fight alongside the Allied forces in World War II. Brazil was the only South American country to send troops to fight in the war.
Brazilian War Propaganda.

The Brazilian Army and Air Force fought in Italy and the Navy in the Atlantic Ocean. During the eight months of the Italian campaign, the Brazilian Expeditionary Force managed to take 20,573 Axis prisoners, including two generals, 892 officers and 19,679 other ranks. During the War, Brazil lost 948 of its own men killed in action across all three services.