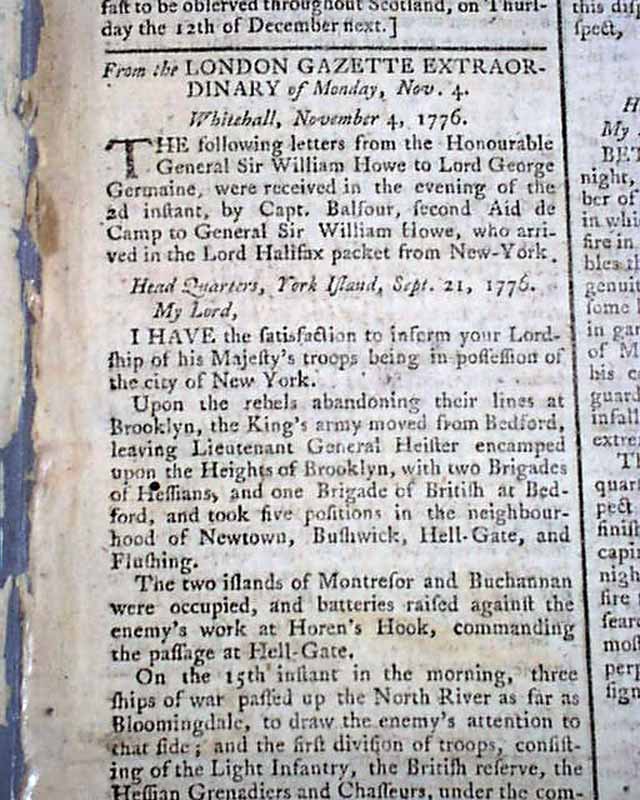 
THE LONDON EVENING-POST, England, Nov. 5, 1776  A full column on page 3 is taken up with a letter from General Howe to Lord G. Germaine dated at "York Island, Sept. 21, 1776". It begins with an historic report: "I have the satisfaction to inform your Lordship of his Majesty's troops being in possession of the city of New York. Upon the rebels' abandoning their lines at Brooklyn, the King's army moved from Bedford..." and then much more detail on the British victory at New York City.
The report is signed in type: W. Howe, and is followed by two more dispatches signed by Howe dated Sept. 23 and Sept. 24. This is the: "Return of Ordinance and Stores taken in the City of New York...after the Retreat of the Rebels, Sept. 15, 1776".
Following this is a lengthy letter from Viscount Howe concerning the naval situation as it relates to the capture of New York City. Other related content as well.
Four pages, folio size, red tax stamp on page 3, various wear at the margins and archivally rejoined at the spine.