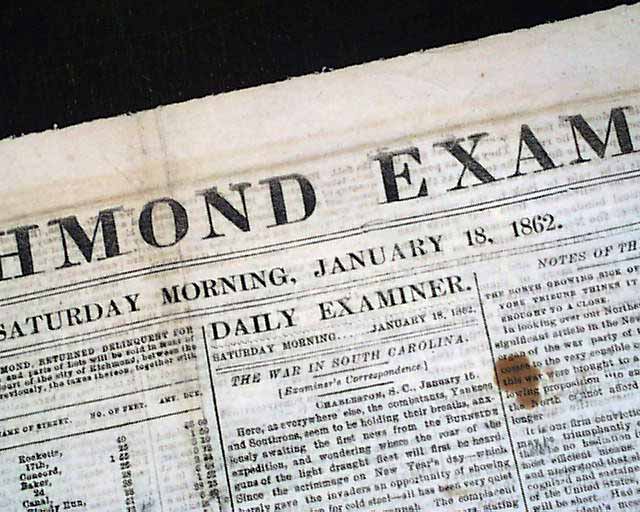 
DAILY RICHMOND EXAMINER, Virginia, January 18, 1862  Not only is this a nice newspaper from the Confederacy, but it is from the Confederate capital.
The front page has: "The War In South Carolina" and: "Notes Of The War--The North Growing Sick of the War--The New York Tribune Thinks it Time the War Were Brought to a Close" with other subheads including: "Great Battles" "The Northern War Patriots..." "The War in Kentucky--Plans of the Enemy..." "The War In Missouri--The Situation".
War-related coverage continues to page 2 with : "The Latest Northern News--Movements & Spirit of the War" "The Northern Congress--Discussion on the Negro Question--Lovejoy's Declaration of War Against Great Britain" "Revocation of Commissions in the Army" "Appointment of Brigadier-Generals" and other items. Page 3 has reports from the Virginia Legislature and "The Cores", "City Intelligence", a few small war-related items, and some ads.
Page 2 also features some nice editorial content, always interesting reading in this newspaper as the editor was rabidly anti-North. He begins with: "The resignation & honourable exile of Cameron, that synonym of corruption, is a significant event. It is the signal of the open disruption of the united North into two factions..." with more (see). There are other editorial discussions as well, taking over a full column.
The back page includes many Acts of the Confederate Congress, several relating to the war.
Complete as a four page issue, never bound nor trimmed, in nice condition.