Home > Back to Search Results > British evacuate Boston... So much more...
Click image to enlarge 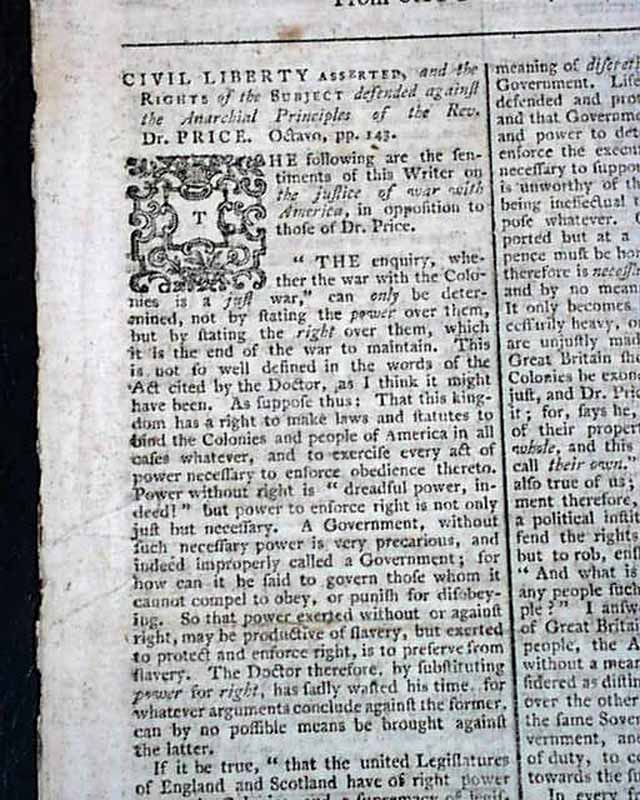 British evacuate Boston... So much more...

The entire front page is an item headed: "Civil Liberty Asserted...sentiments of this Writer on the Justice of war with America..." in which the writer presents an opposing view to Dr. Price in his recent controversial--and historically significant--pamphlet titled "Observations on the Nature of Civil Liberty, the Principles of Government, and the Justice & Policy of the War with America". Price's pamphlet played no small role in causing America to declare their independence & is considered the most influential English defense of the colonists in the Revolutionary War. See photos for portions.
Page 2 has a report beginning: "General Howe, Commander in Chief of his Majesty's forces in North America, having taken a resolution on the 7th of March to remove from Boston to Halifax..." with more. Page 3 has a report beginning: "Expect no more letters from Boston. We have quitted that place. Washington played on the town for several days. A shell, which burst whilst we were preparing to embark, did very great damage. Our men have suffered..." with more.
Another page has: "An Award For the Final Settling the Disputes, now unhappily (perhaps fatally) subsisting between the Mother Country & the British Colonies of North America." (see). And yet another page notes: "...a paper, printed in red letters, called the American Gazette, was brought to the Plough Inn in this town & read before a number of tradesmen...who unanimously condemned it to the flames..." with more. The same page has a terrific account of the bombardment of Boston by Washington (see photos), taking half the page with details on the British evacuation of the town. The back page has even more on the battle of, and evacuation of Boston.
Eight pages, 8 1/4 by 11 inches, nice condition. Great to have a Revolutionary War newspaper with a 1776 date, & less than 2 months before the Declaration of Independence.