Home > Back to Search Results > Lost in the Bermuda Triangle... Perhaps the most famous unsolved mystery...
Click image to enlarge 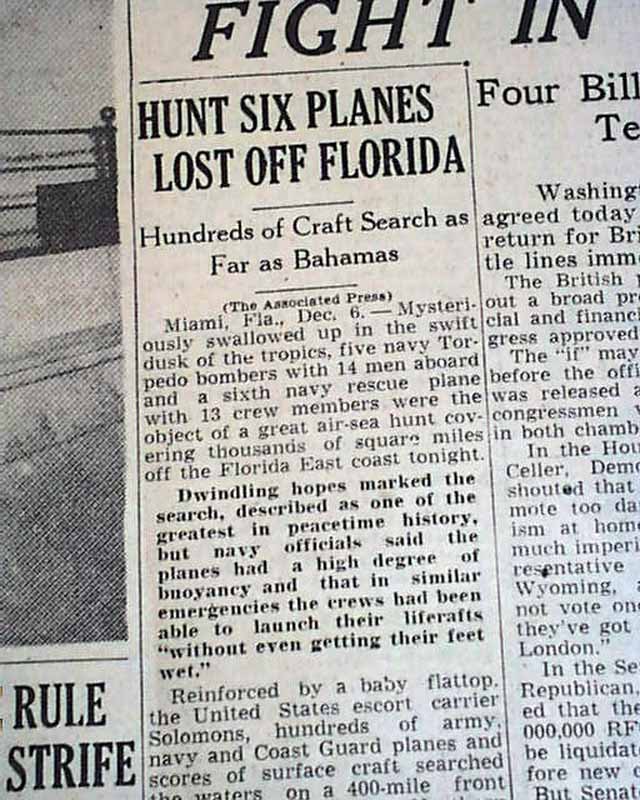 Lost in the Bermuda Triangle... Perhaps the most famous unsolved mystery...

The front page has a one column heading: "HUNT SIX PLANES LOST OFF FLORIDA" with subhead. (see) This is an actual report of one of the more bizarre mysteries in American history, particularly with the controversy about the existence of a "Bermuda Triangle", and this incident figuring in Spielberg's famous movie.
Other news, sports and advertisements of the day. Complete in 30 pages, some wear along the central fold with archival mending on page 2 which slightly affects mentioned article, otherwise generally in good condition.

Wikipedia "Flight 19 was the designation of five TBM Avenger torpedo bombers that disappeared on December 5, 1945, during a United States Navy-authorized over-water navigation training flight from Naval Air Station Fort Lauderdale, Florida. Trouble of an unknown nature plagued the senior aviator designated to observe Flight 19 during this assignment; first with a late arrival requesting to be relieved, then later with complete confusion and irrational fears which further worsened the students' situation by mistakenly leading them away from land. All 14 airmen on the flight were lost, as well as 13 crew members of a PBM Mariner flying boat, which may have exploded in midair while searching for the flight. Navy investigators concluded that Flight 19 may have become disoriented and ditched in rough seas when the aircraft ran out of fuel, while the PBM may have been a victim of mechanical failure. A fictionalized version of Flight 19 is featured in the 1977 science fiction film Close Encounters of the Third Kind."