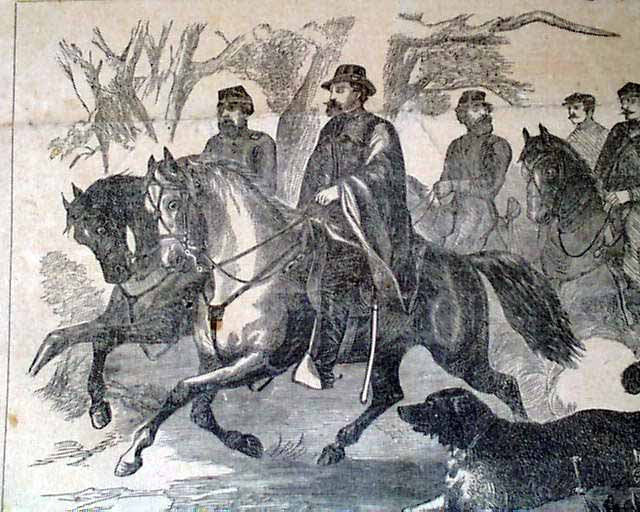 A very rare publication from the Confederacy which seldom comes to the collector market. Although much of the content was literary in nature, there are news reports and a few illustrations.
A nice feature of this issue is the large front page illustration which is different from most, as rather than a solo portrait of a famous general this one features a group illustration of: "Gen. John H. Morgan And Staff" on horseback (see).
Page 2 has an article headed: "The Times" which reports on the latest Civil War news of the day, a few bits including: "...the Yankees commenced shelling the town of Port Royal on the Rappahannock. There was nobody in it but old men, women and children...This act of wanton & unalloyed barbarity would have excited amazement had the perpetrators been any other than what they are--that is, Yankees...Heavy firing was heard in the direction of Fredericksburg...we learn that Gen. Morgan attacked a large Yankee force at Hartsville...& routed them completely...Gen. Rosecrans was said to be moving upon Murfreesborough. Gen. Johnston is reported to be there with Gen. Bragg's army..." and more (see).
Page 4 has a nice print of: "General Jeff. Thompson" as well as a lengthy biography of him. Other pages include two poems: "The Trooper To His Steed" and "The Rebel Sock".
Begun on September 13, 1862 the "Southern Illustrated News" sought to fill the void left when the Southern States lost access to Harper’s Weekly and other illustrated newspapers from the North. In its “Salutatory,” in the first issue the editors state:  "...We propose to issue an Illustrated Family Newspaper…devoted to literature, to public instruction and amusement, to general news, and to the cause of our country in this trying hour when she is engaged in a terrible, but resolute and hopeful struggle for her liberty and independence..." Although it could be argued it never lived up to all of these goals as reports from the war were very limited, it was an important publication nonetheless. At its peak boasting as many subscribers as the largest daily paper in Richmond. As with all Southern publications it suffered from lack of supplies, reporters, artists and engravers as many had been drafted either into the military or into the service of the Confederate administration to engrave paper money and stamps. The engravings were crude when compared to Yankee publications.
Eight pages, some scattered toning, generally nice condition.