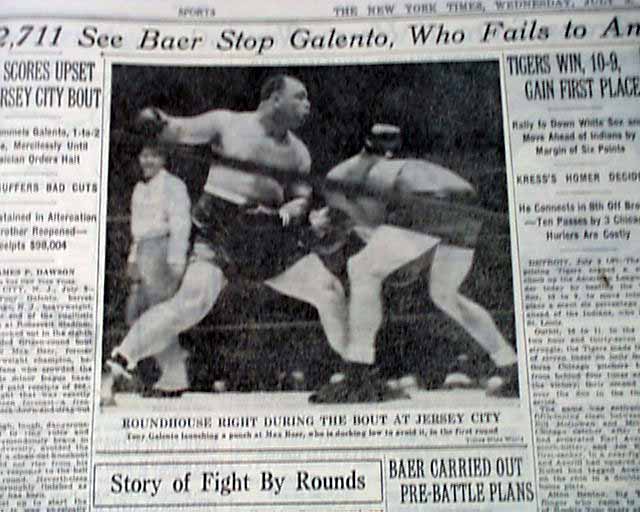 The sport's section (page 21) has a banner headline: "22,711 See Baer Stop Galento, Who Fails to Answer Bell for Eighth Round" with subheads, round by round coverage and related photo. Always nice to have notable events in history reported in this World famous publication.
Other news, sports and advertisements of the day. Complete with all 38 pages, rag edition in nice condition.


wikipedia notes: Galento's fight with Max Baer ended when the referee stopped the bout in the eighth round. On the day of the Baer fight, Galento decided to first stop off at his bar. There he had a big bowl of spaghetti, with meat balls, washed down with half a case of beer. After his meal, Galento became embroiled in an argument with his brother. The dispute ended when his brother threw his beer glass in Galento's face, severely cutting his lip. Galento was forced to get the cut stitched up, hours before the fight. Baer re-opened the cut in the first round, forcing Galento to swallow blood for the remainder of the fight. After the fight, Galento blamed his inability to "hook him around the head and butt him" for the loss. His record was 80-26-5 with 57 knockouts.