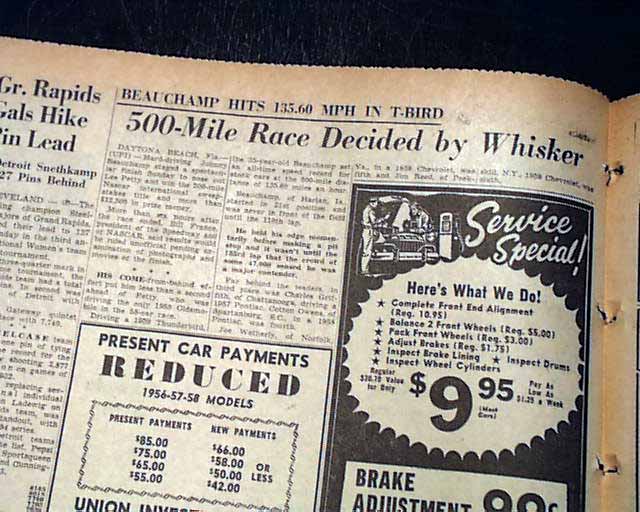 Within the sport's section on page 36 is a four column heading: "500-Mile Race Decided by Whisker" See images for text on the very 1st Daytona 500 Nascar race. It was also historic for having a photo finish which took three days to figure out who won. Lee Petty would be proven the official winner of the race.
Other news, sports and advertisements of the day. Complete with all 40 pages, small binding holes along the spine, small library stamp within masthead, generally very nice.

wikipedia notes: Beauchamp crossed the finish line at about the same time as Lee Petty in the Daytona 500 in 1959. Beauchamp was declared the unofficial winner of the race, so he drove the Holman Moody owned Ford to victory lane. Petty protested the win. "I had him by two feet," Beauchamp said. "I glanced over to Lee Petty's car as I crossed the finish line and I could see his headlight slightly back of my car. It was so close I didn't know how they would call it, but I thought I won." NASCAR founder Bill France, Sr. studied photographs and newsreels for three days before declaring Petty the official winner.