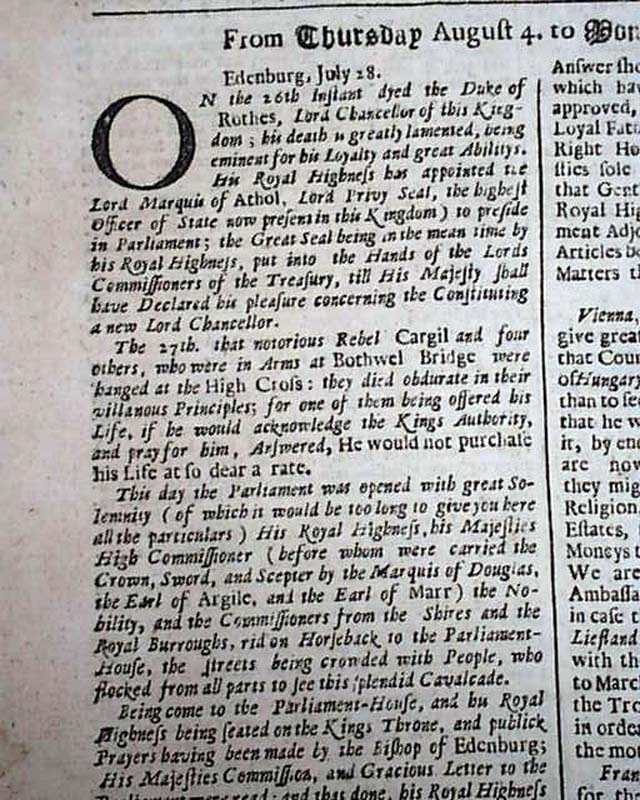 
THE LONDON GAZETTE, England, Aug. 8, 1681  The front page item datelined Edenburg begins with: "On the 26th Instant dyed the Duke of Rothes, Lord Chancellor of this Kingdom..." Also: "The 27th the notorious Rebel Cargil and four others who were in arms at Bothwel Bridge were hanged at the High Cross: they died obdurate in their villanous principles..." (see). This was Donald Cargill who was a minister in Glasgow from 1655 until 1662, when he was expelled for denouncing the Restoration and resisting the establishment of the episcopacy in Scotland. After escaping wounded from the battle of Bothwell Bridge (1679), he joined Richard Cameron in the Sanquhar Declaration (1680) against Charles II. Cargill, having excommunicated the king, the duke of York, and others, was arrested and executed, as reported here.
The back page has a brief report which notes the arrival of a ship: "...Endeavour of Plimouth, in six weeks from Virginia the master says. They have had a very indifferent crop there this year."
Complete as a rare 4 page newspaper as most were single sheet at that time. Slightly irregular at the blank spine,7 by 11 inches, bit of light damp staining, generally very nice.