Home > Back to Search Results > Terrific issue on the Arnold/Andre treason...
Click image to enlarge 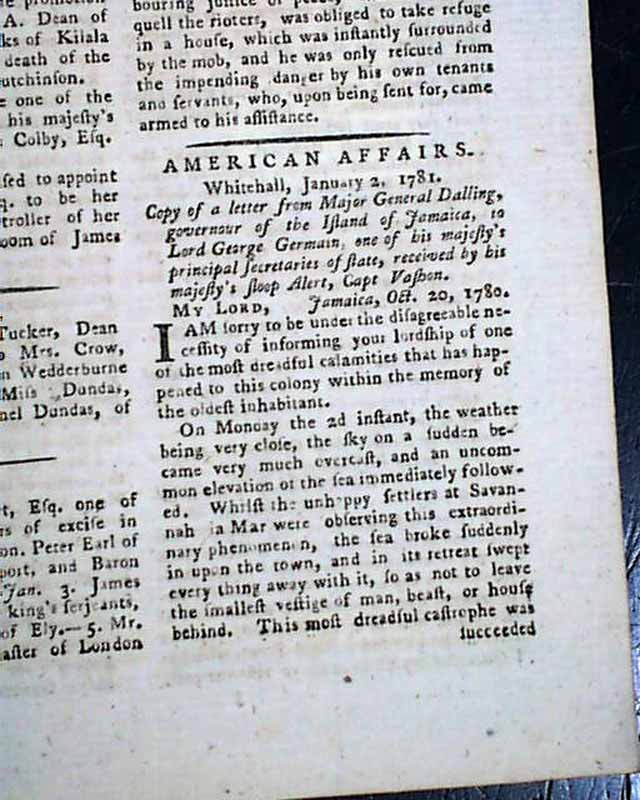 Terrific issue on the Arnold/Andre treason...


THE LONDON MAGAZINE, England, January, 1781  Near the back are two pages filled with terrific & historic correspondences concerning the infamous Benedict Arnold/Major John Andre treason plot.
One letter is headed: "Substance of the Proceedings on the Trial of Major Andre, held at Tappan, Sept. 29, 1780..."Extract of Letters from General Washington to the President of Congress". This letter, and the several that follow, have much detail on the capture of Andre, the escape of Arnold once the plot was revealed, and the pleas for the release o Andre based on documentation of innocence. A few bits include: "...all in the hand-writing of General Arnold; this was also accompanied with a letter from the prisoner, avowing himself to be Major John Andre, adj. general to the British army, relating the manner of his capture & endeavouring to show that he did not come under the description of a spy...". Another letter has: "...the proceedings of a board of general officers in the cause of Major Andre...This officer was executed in pursuance of the sentence of the board, on Monday the 2nd instant at twelve o'clock, at our late camp at Tappan...". Also a letter signed in type by: G. Washington, and a lengthy letter signed in type: John Andre, Adj. Gen. with his plea for leniency, and even more.
See the photos for the great content as just too much to mention here.
One of the two plates called for is lacking.
Complete in 48 pages, 5 by 8 inches, very nice condition.