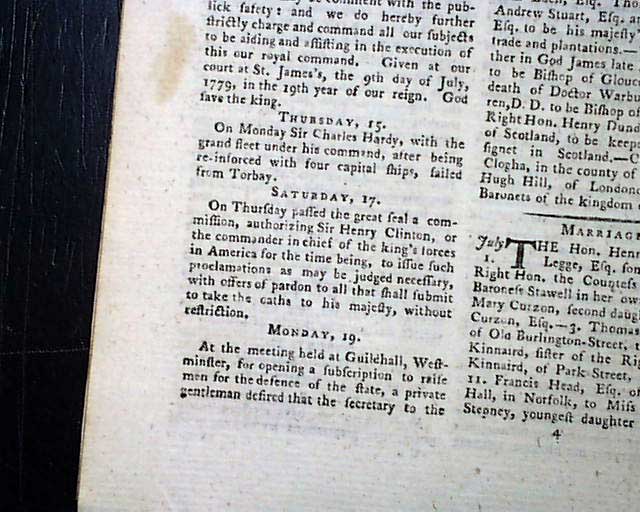 Item # 660093 THE LONDON MAGAZINE, England, July, 1779  Over 3 pages headed: "American Affairs" which includes a letter from General Clinton "...giving an account of their success in Chesapeak Bay...sensible of the importance of the posts of Stony Point & Verplanks...the enemy's works should be nearly completed..." with much more. This is followed by several more reports of the military action in the New York vicinity, as well as events in Georgia with letters signed in type: Geo. Collier & John Henry.
There are also reports from "Rivington's Royal Gazette", one item beginning: "..informed that the rotten state of the new republick, the late exhibition of Mr. Washington's number, are grown precious slender at Middlebrook, the incurable depreciation of the continental paper dollars, the blow given to the French interests in Chesapeak, the increasing animosities at Philadelphia, & in short, the perfect chaos into which Congress affairs are reduced...". The reports continue, several datelined at New York, one noting: "...surprised a party of rebels at White Plains...we are informed that Mr. Washington still continued at Middle-Brook having sent a detachment from his army...Northumberland is covered with Indians in such a manner that except Fort Muncey [Muncy] which they expect soon to relinquish..." with much more.
Near the back has much reporting from Parliament taking 6 1/2 pages & includes some talk of the Revolutionary War. Also near the back: "...a commission authorizing Sir Henry Clinton, or the commander in chief of the king's forces in America...to issue such proclamations as may be...necessary with offers of pardon to all that shall submit to take the oaths to his majesty without restriction."
One of the two plates called for is present.
Complete in 48 pages, 5 by 8 inches, great condition.