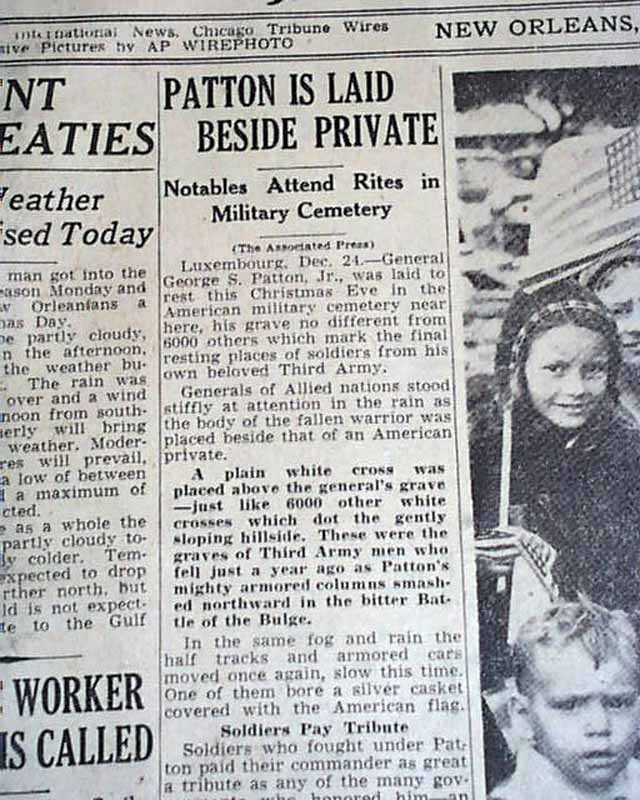 The top of the front page has a one column heading: "PATTON IS LAID BESIDE PRIVATE" with subhead. (see)
Other news, sports and advertisements of the day. Complete in 14 pages, light toning at the margins and central fold, a little irregular along the spine, generally nice.

wikipedia notes: On December 9, 1945, Patton was severely injured in a road accident. He and his chief of staff, Major General Hobart R. "Hap" Gay, were on a day trip to hunt pheasants in the country outside Mannheim. Their 1938 Cadillac Model 75 was driven by Private First Class Horace Woodring (1926–2003), with Patton sitting in the back seat on the right side, with General Gay on his left, as per custom. At 11:45 near Neckarstadt (Mannheim-Käfertal), a 2½ ton GMC truck driven by Technical Sergeant Robert L. Thompson made a left turn in front of Patton's Cadillac. Patton's car hit the front of the truck, at a low speed.

At first the crash seemed minor, the vehicles were hardly damaged, no one in the truck was hurt, and Gay and Woodring were uninjured. However, Patton was leaning back with trouble breathing. The general had been thrown forward and his head struck a metal part of the partition between the front and back seats, incurring a cervical spinal cord injury. Paralyzed from the neck down, he was rushed to the military hospital in Heidelberg. Patton died of a pulmonary embolism on December 21, 1945. The funeral service was held at the Christ Church (Christuskirche) in Heidelberg-Südstadt.