Home > Back to Search Results > Battle of Brandywine and Burgoyne's surrender at Saratoga...
Click image to enlarge 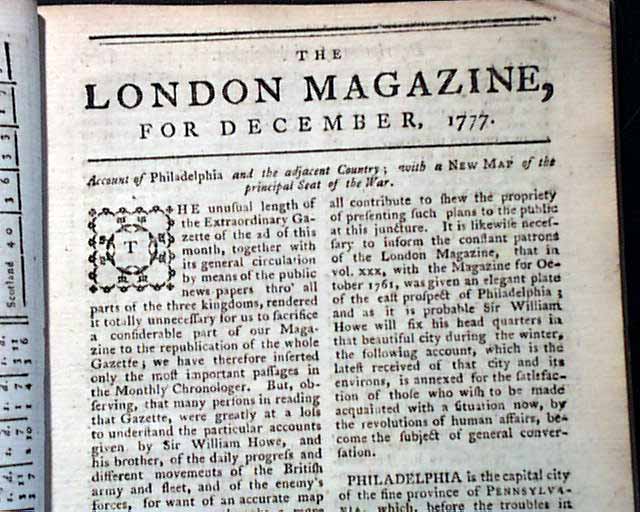 Battle of Brandywine and Burgoyne's surrender at Saratoga...

Item # 660015 THE LONDON MAGAZINE, England, December and the Appendix for the year 1777  A very historic issue, as near the back are over 5 pages taken up with some very historic reports on the Revolutionary War.
It is all headed: "American Affairs" and begins with a two page report from General Howe's army on the Battle of both Brandywine. At the end of the report is the "Return of...killed, wounded, and missing...in the General Engagement on the Heights of the Brandywine, Sept. 11".
This is followed by a letter from General Campbell to General Clinton dated from Staten Island on events there, and then a letter from General Clinton to General W. Howe dated at Fort Montgomery, Oct. 9 with much on the battle there. And then a letter from General Howe to Lord G. Germaine with great military reporting.
But certainly the most notable content is the very fine and detailed letter from General Burgoyne to Lord G. Germaine on his surrender at Saratoga. Included are the articles of capitulation formalizing his surrender to American General Gates.
One of the two plates called for is present.
Included as well is the "Appendix" for the year which includes a full page plate. Much reporting from Parliament, including items on the Revolutionary War.
Complete in 80 pages with the Appendix, 5 by 8 1/4 inches, great condition.