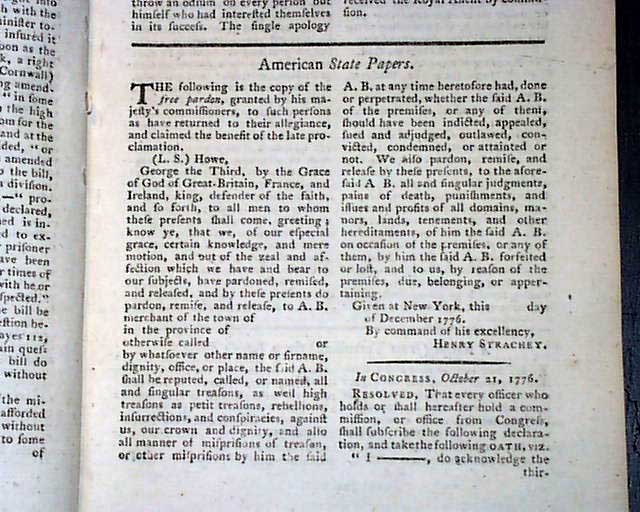 Item # 660003
THE LONDON MAGAZINE, England, April, 1777  Under "American State Papers" is the King's free pardon to those who: "...have returned to their allegiance, and claimed the benefit of the late proclamation....Given at New York, this day of December 1776."
Following this is a Resolve by Congress stating that: "...every officer who holds or shall hereafter hold a commission, or office from Congress, shall subscribe, the following declaration, and take the following oath...have no allegiance or obedience ot George the Third...and I renounce, refuse & abjure any allegiance or obedience to him..." signed in type: John Hancock.
There is also a proclamation issued by his Excellency George Washington in response to Lord Howe's late proclamation for allegiance, encouraging those individuals to recant and take an oath to the United States, or be: "...treated as common enemies to these America states." signed in type by Robert Harrison, Gen. Washington's secretary.
At the back under: "American Affairs" are accounts from Congress and events of the war, one bit noting: "Upon the evacuation of Elizabeth Town, General Maxwell fell upon the enemy's rear and made 70 prisoners...". Reports on the back page give accounts of the historic Battle of Princeton.
One of the two plates called for is present.
Complete in 56 pages, 5 by 8 1/4 inches, great condition.