Home > Back to Search Results > Great on the tensions between England & the colonies...
Click image to enlarge 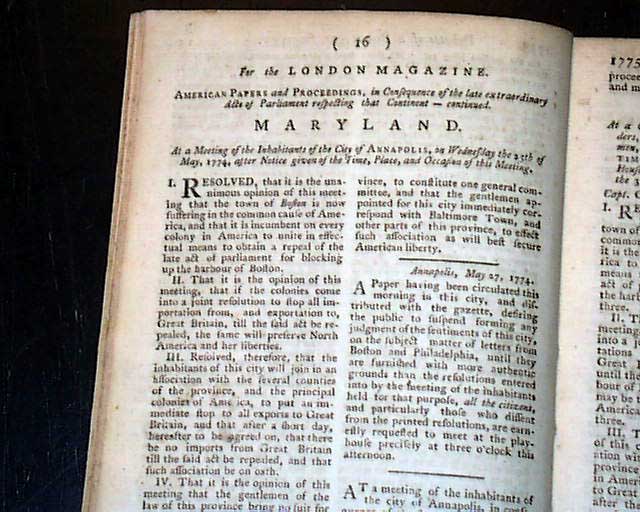 Great on the tensions between England & the colonies...


THE LONDON MAGAZINE, England, January, 1775  Within the issue: "Resolutions of the Freeholders of Baltimore County" which includes: "Resolved...that the town of Boston is now suffering in the common cause of America & that it is the duty o every colony in America to unite in the most effectual means to obtain a repeal of the late act of parliament for 'blocking up the harbour of Boston'...." with much more on this taking over 4 pages.
Also: "Address of the General Congress to the Inhabitants of the Province of Quebec." which takes almost 5 pages of rousing commentary on the abuses of England towards them and the wish that the people of Quebec would join in with the American cause. This document of Oct. 26, 1774 reads very much like the "Continental Association" document created just 6 days prior, stating the grievances against England the need to unite for action to fight them.
This was also the adjournment of the First Continental Congress with a provision in this document for a 2nd session to be held at Phila. on May 10, 1775, which would be the historic Second Continental Congress.
Near the back are current news reports including: "...that the alarming state of the trade to North America makes it expedient to petition Parliament for redress...". Also almost two pages of: "American Affairs" beginning: "In our Chronologer of December, we left American affairs in a very distracted situation--Boston blocked  up, and inaccessible to commerce, the parent of affluence--her sons armed in defense of their liberties--trade totally at a stand, and all connections with the mother country recommended...forbidden..." with much more. Great content.
Complete in 48 pages, 5 by 8 inches, lacking the plate called for, very nice condition.