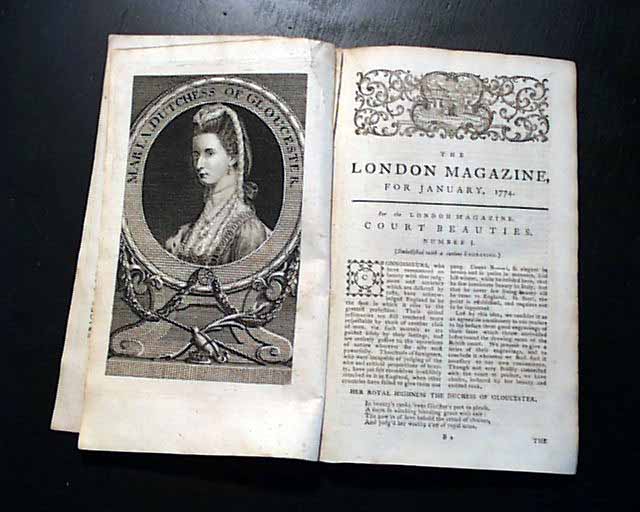 Near the back under the heading: "America" is a nice report datelined "Boston, Dec. 20", being a detailed account of what we now know as the Boston Tea Party. The entire text is seen in the photos below, with portions including: "...assembled at the Old South Meeting House to enquire the reason of the delay in sending the ship Dartmouth, with the East India tea, back to London...frustrated by the tea consignees, the Collector of the Customs, and the Governor of the province, dissolved the meeting. But behold what followed! A number of resolute men (dressed like Mohawks or Indians), determined to do all in their power to save their country from  the ruin which their enemies had plotted, in less than four hours emptied every chest of tea on board the three ships...amounting to 342 chests, into the sea! without the least damage done to the ships or any other property...and the people are almost universally congratulating each other on this happy event." with more.
This is followed by further reporting relating to the tea issue, one paragraph beginning: "An inflammatory hand-bill was a few days ago distributed in Philadelphia addressed to the Delaware pilots, informing them that a ship loaded with tea is on her way to that port, being sent out for the purpose of enslaving & poisoning all the Americans...".
Although there is much other content of various themes, it certainly pales in comparison to this Boston Tea Party report.
All three plates called for are present, one a foldout piece of music.
This is a considerably more rare title than the more common "Gentleman's Magazine" after which it is modeled, as the format is extremely similar. The title/contents page features a very nice engraving of the skyline of London.
Complete in 52 pages, measures 5 1/4 by 8 1/4 inches, nice condition.

Details on the British military in Am...