Home > Back to Search Results > Philadelphia cannot be taken by the British...
Click image to enlarge 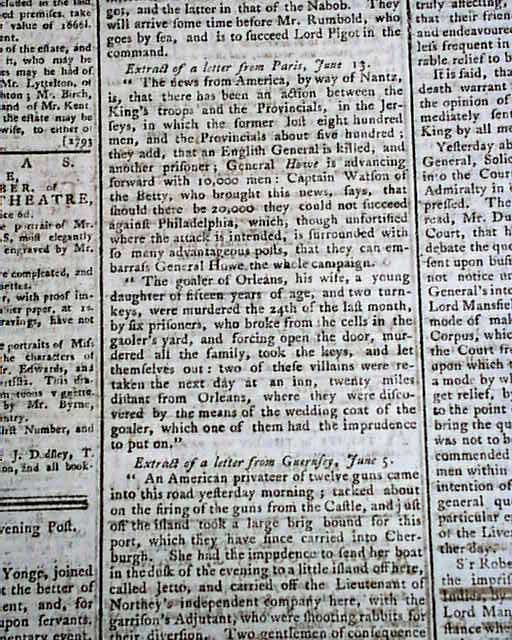 Philadelphia cannot be taken by the British...


THE LONDON EVENING POST, England, June 19, 1777  The front page has: "The news from America...is that there has been an action between the King's troops and the Provincials in the Jerseys...General Howe is advancing forward with 10,000 men...that should there be 20,000 they could not succeed against Philadelphia...so many advantageous posts that they can embarrass General Howe, the whole campaign."
Page 3 has a few items, and the back page has a letter to Lord North which is pessimistic on the war, one item noting: "...with an immense fleet, a very large army...Great Britain occupies of American land a bare extent of about 30 miles after having destroyed in part a few of; their towns...to maintain the small spot our arm covers, I am grieved to think what must be the pitiable situation of this country..." and more.
Four pages, folio size, never-trimmed margins, red tax stamp on page 3, good condition.