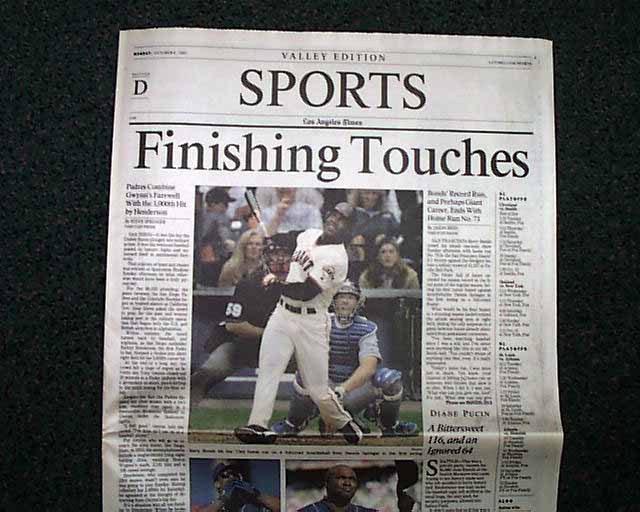 
LOS ANGELES TIMES, October 8, 2001  The front page of the Sports Section has the full-banner headline: "FINISHING TOUCHES", with considerable text and a large photo, which tell of Barry Bonds breaking the record for most home runs in a season with his 73rd homer. The related subheading has: "Bond's Record Run, and Perhaps Giant Career, Ends With Home Run No. 73."
This was an historic date in baseball history as Rickey Henderson collected his 3,000th hit, and Tony Gwynn retired - both of which include photos as well.
The front page has the two-line, full-banner heading: "U.S. Launches Attack - Missile Strikes Target Key Taliban Sites", which includes two related photos - one of President Bush, and the other of a missile launch.
Most if not all major sections are present, but the issue is being offered for the described/photoed content. The lower right margin has a few creases, but overall, the issue is in very good condition.