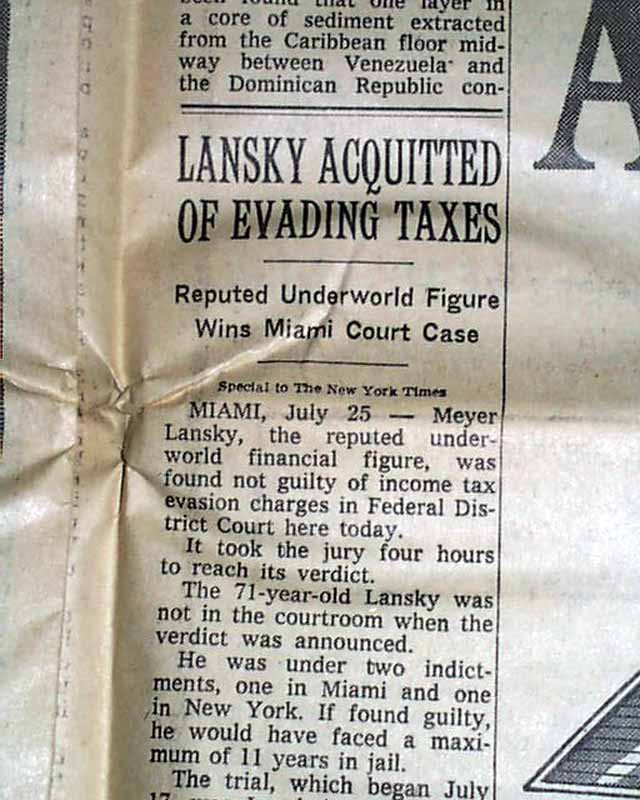 
NEW YORK TIMES, July 26, 1973  The 1st column of page 25 has: "LANSKY ACQUITTED OF EVADING TAXES", which tells of the verdict regarding Meyer Lansky's trial for tax evasion. He was infamous for his role as the "Mob's Accountant."
The front page has a 3-line, 4-column heading: "EHRICHMAN DENIES COVER-UP ROLE; SAYS NIXON BARRE CLEMENCY IDEA; DISPUTES DEAN, MITCHELL AND GRAY", which includes multiple related photos. Nice content related to the Watergate Scandal.
The front page of the Sports Section has a nice image of Hank Aaron, highlighting his quest to surpass Babe Ruth's HR record.
Other news of the day including sports are included.
The issue is believed to be complete in 68 pages, but is being offered for the described and photoed content. Overall nice condition, but there is a small archival mend the the upper margin on the front page, and a bit of rubbing and toning at the mid-fold, as well as typical crinkling (no damage) on the inside left margins due to folding. See images for details.