Home > Back to Search Results > Address to the betrayed inhabitants of New York...
Click image to enlarge 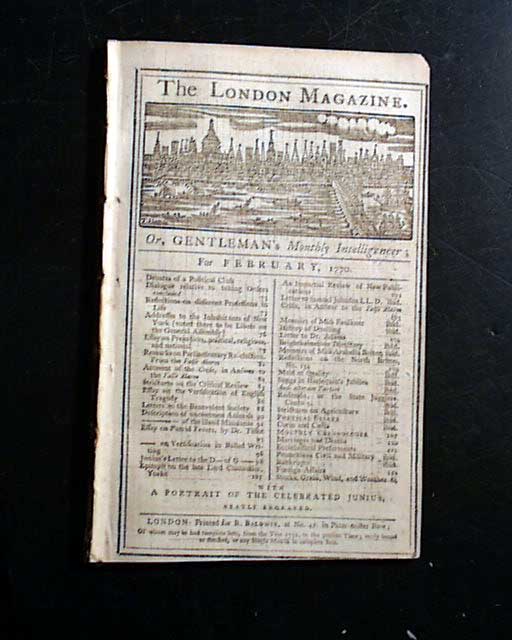 Address to the betrayed inhabitants of New York...

Perhaps the most interesting feature is the full title/contents page which has a very intricately engraved view of the skyline of London at the time, making this very decorative.
Of great interest are 2 1/2 pages with a letter: "To the Betrayed Inhabitants of the City & Colony of New York" which is terrific reading on the harsh treatment of the colonists by the British Parliament. It begins: "In a day when the minions of Tyranny & Despotism in the Mother Country & the Colonies are indefatigable in laying every snare that their malevolent & corrupt hears can suggest to enslave a free people..." with much, much more (see). It is signed at its conclusion: "A Son Of Liberty" and is prefaced with a note that the letter was voted as false, seditious & infamous libels & a reward of 100 pounds has been offered for the author.
Near the back are various reports headed "America" including an item rom Williamsburg on enforcing the non-importation agreement. And an item notes: "...the people of Rhode Island have at last really united with the rest of the colonies in resolutions of non-importation...". A report from Charleston deals with problems with Indians, and two reports from New York.
The plate called for is lacking.
Complete in 56 pages, 5 by 8 inches, excellent condition.