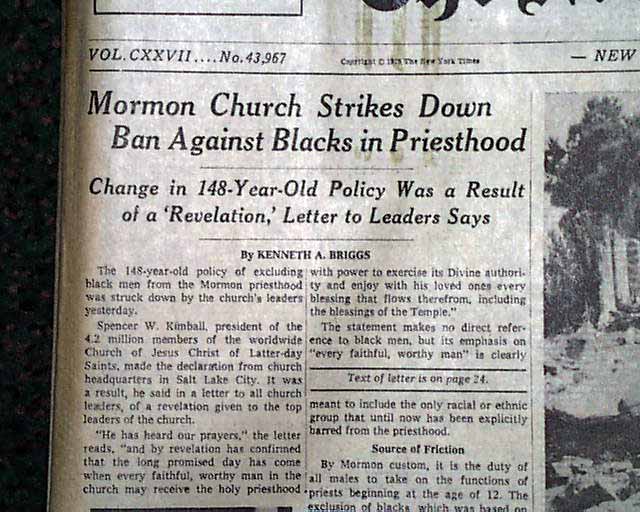 The front page has the historic announcement: "Mormon Church Strikes Down Ban Against Blacks in Priesthood", with the subheading: "Change in 148 Year-Old Policy Was a Result of a 'Revelation,' Letter to Leaders Says." A photo of Spencer W. Kimball, president of the Church of Jesus Christ of Latter-day Saints, is included. The article continues on an inside page, where another related article prints the entire text of the letter. Quite historic!
Page 14 has: "Knicks Draft a Guard As Big Men Get Away", which includes a subheading: "Celtics Have a Year" - a segment dedicated to the Boston Celtics' selection of Larry Bird at #6, even though they knew he was going to stay in college for another year in order to earn his degree. Time would certainly prove this to be a risk worth taking. Included are other articles regarding the NBA College Draft.
Other news of the day is found throughout.
Complete in 36 pages, evenly toned, glue residue from removed library stamp, a few wrinkles, but in overall good condition. See images for details.