Home > Back to Search Results > Details on the capture of General Lee...
Click image to enlarge 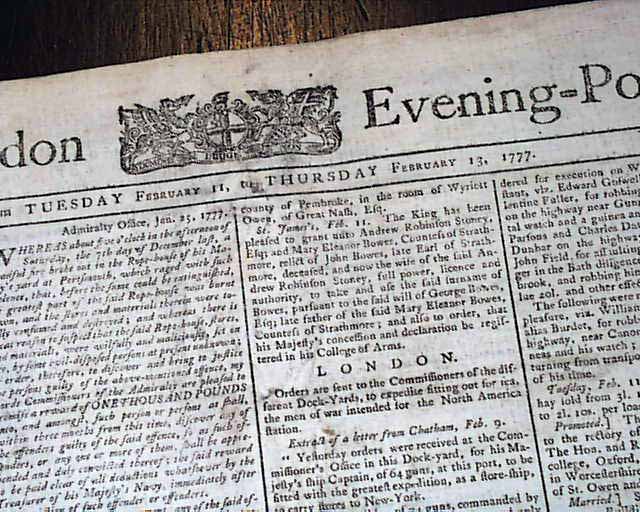 Details on the capture of General Lee...


THE LONDON EVENING POST, England, Feb. 13, 1777  Page 3 has reports from America including: "...dispatches from Rhode Island...said to be very satisfactory & that General Lee was taken prisoner..." and what follows are the details on how he was captured. Then: "...that she had prisoner on board Gen. Lee, who was taken by Col. Harcourt in a house in Phila.; that he delivered up his sword  to that officer & claimed the benefit of Gen. Howe's proclamation but was told that as he was found in arms he was not entitled to it."
Also a bit that: "...the disagreeable news to court of very great desertions in the British army. The soldiers do not enter into the Provincial army but retire to the back settlements where they meet with every encouragement from the Americans."
The back page has a report beginning: "The late loss of between 14 and 1500 Hessians at Trenton is a melancholy proof to what fatal accidents procrastination this American war is subject to..." with more. Further on: "The report of General Lee being taken is generally supposed in the city to be circulated to counterbalance the account of the defeat of the Hessians at Trenton."
Four pages, never-trimmed margins, red tax stamp on page 3, good condition.