Home > Back to Search Results > One of just two known newspapers with a contemporary account of the Salem witch trials...
Click image to enlarge 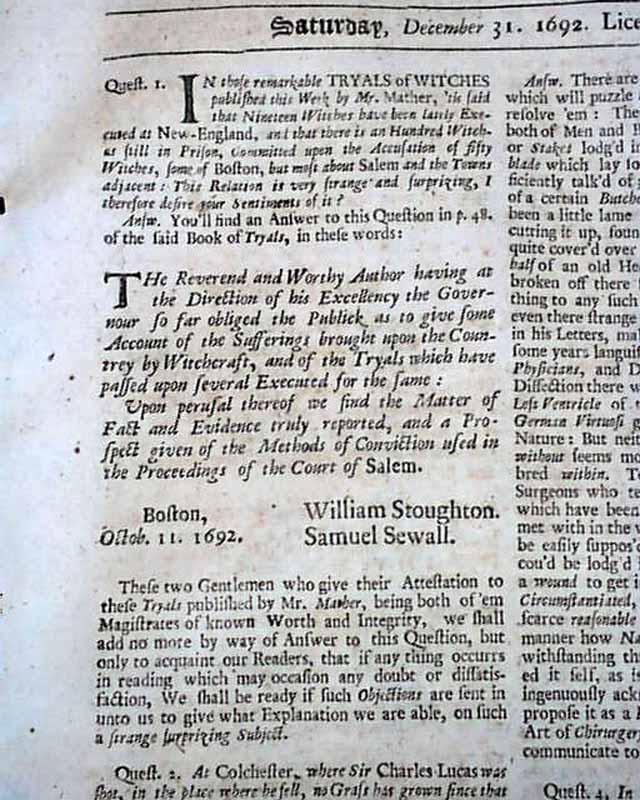 One of just two known newspapers with a contemporary account of the Salem witch trials...

An exceedingly rare issue as it is one of only two known contemporary newspaper accounts of the Salem witch trials.
This newspaper published in question/answer format, and the front page begins with: "Quest 1. In the remarkable TRYALS of WITCHES published this Week by Mr. Mather, 'tis said that Nineteen Witches have been lately Executed at New-England, and that there is an Hundred Witches still in Prison, Committed upon the Accusation of fifty Witches, some of Boston, but most about Salem and the Towns adjacent : this Relation is very strange and surprizing, I therefore desire your Sentiments of it?
Answ: You'll find an Answer to this Question in p. 48. of the said Book of Tryals, in these words: The Reverend and Worthy author having at the Direction of his Excellency the Governour so far obliged the Publick as to give some Account of the Sufferings brought upon the Countrey by Witchcraft, and of the Tryals which have passed upon several Executed for the same:
Upon perusal thereof we find the Matter of Fact and Evidence truly reported, and a Prospect given of the Methods of Conviction used in the Proceedings of the Court of Salem. Boston, Octob. 11. 1692. William Stoughton / Samuel Sewall."
Both Stoughton and Sewall were judges during the Salem witch trials, William Stoughton effectively in charge of the trials.
Note also the paragraph which follows, beginning: "These two gentlemen who give their attestation to these Tryals published by Mr. Mather, being bot of 'em Magistrates of known worth and integrity..." with more.
Additionally, as an added and significant companion item, the back page features an advertisement for the noted book on the Salem witch trials written by Cotton Mather: "The TRYALS of several WITCHES lately Executed in New-England, and of several remarkable curiosities therein occurring. By Cotton Mather. Published by the Special Command of the Governour."
There were no newspapers published in America at this time, leaving the English papers as the sole source of coverage.
Complete as a single sheet newspaper, measures 7 1/4 by 12 1/4 inches, very nice condition. 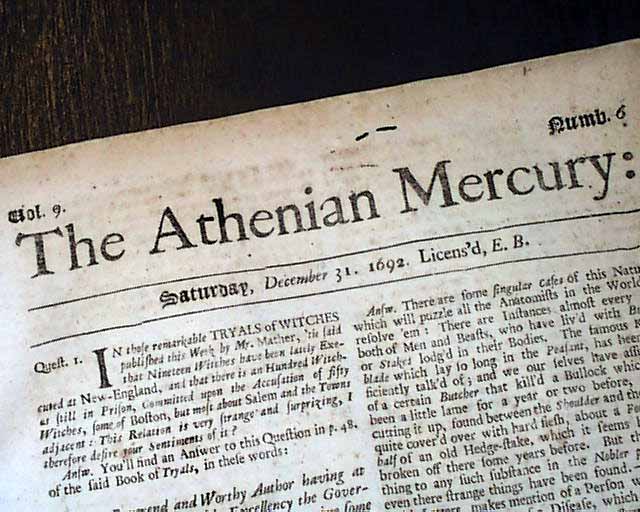 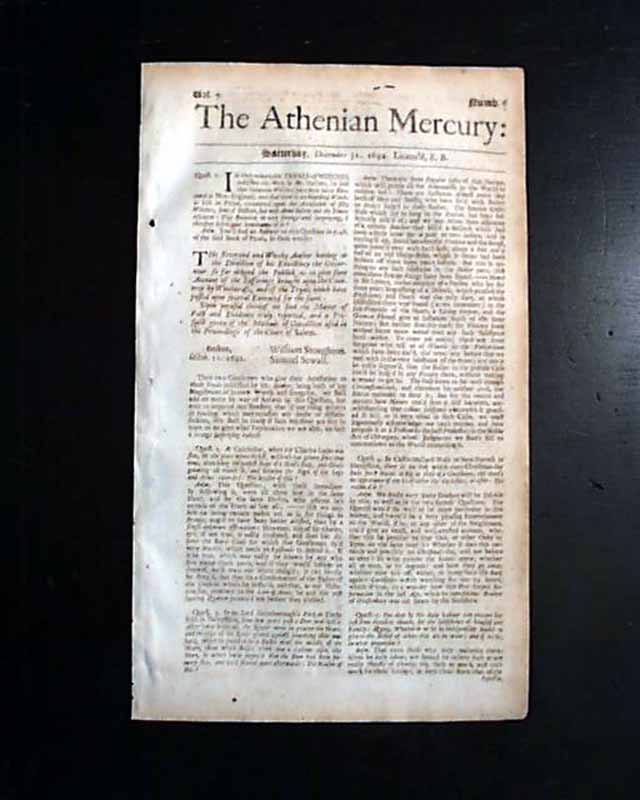 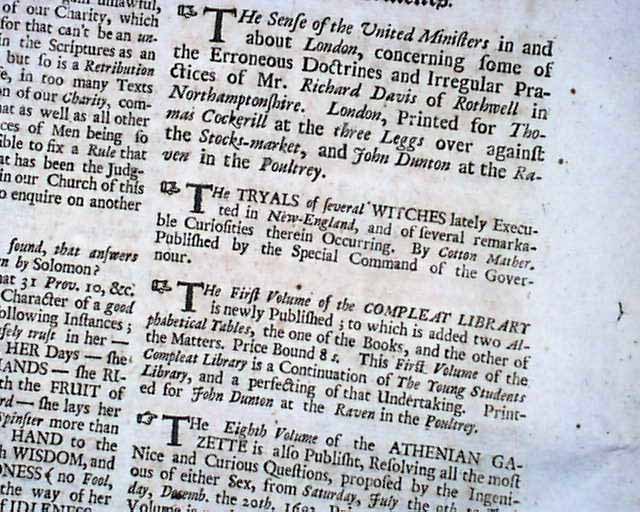 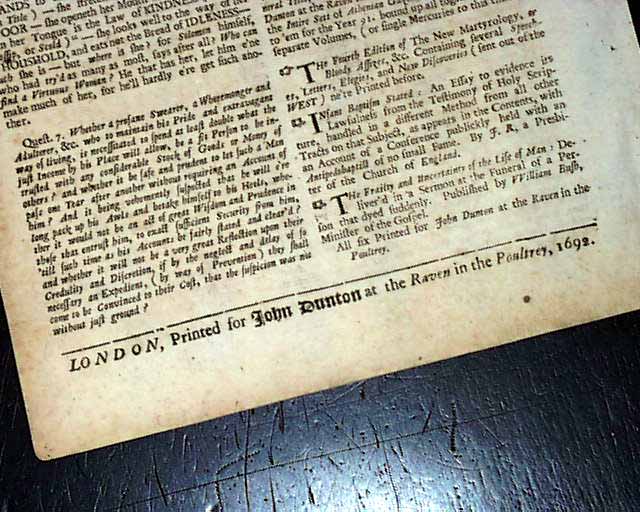 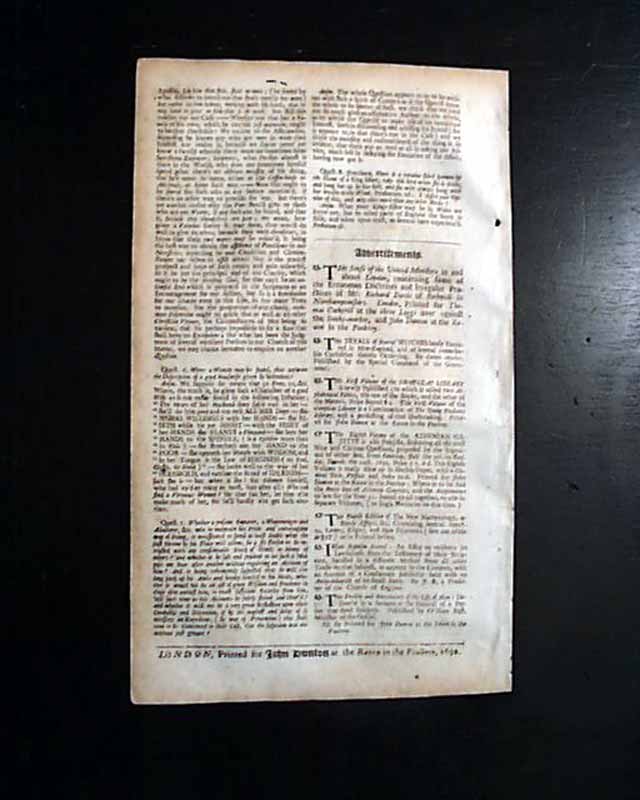