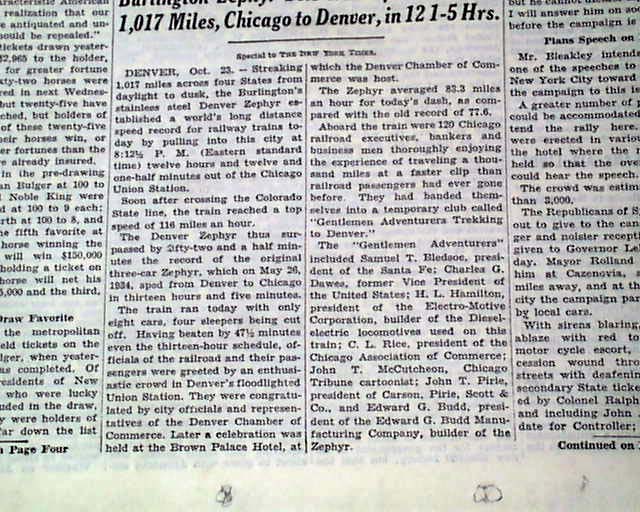 Near the bottom of the front page is a two column heading: "Burlington Zephyr Sets New Speed Record; 1,017 Miles, Chicago to Denver, in 12 1-5 Hrs." (see) Always nice to have notable events in history reported in this World famous publication.
Other news, sports and advertisements of the day. Complete with all 36 pages, this is the rare rag edition that was produced on very high quality newsprint, with a high percentage of cotton & linen content, allowing the issues to remain very white & sturdy into the present. Given the subscription cost, libraries & institutions rather than individuals were the primary subscribers of these high-quality editions. Nice condition.

wikipedia notes: The Denver Zephyr was a streamlined passenger train operated by the Chicago, Burlington and Quincy Railroad between Chicago, Illinois, and Denver, Colorado. It operated from 1936 to 1973. On 23 October 1936 one of the new trainsets made a special run nonstop Chicago to Denver in 12 hrs 12 min 27 seconds. Distance was given as 1017.22 miles via the Plattsmouth bridge and direct to Lincoln, bypassing Omaha.