Home > Back to Search Results > A woman set fire to New York? Franklin & Adams with a flag of truce...
Click image to enlarge 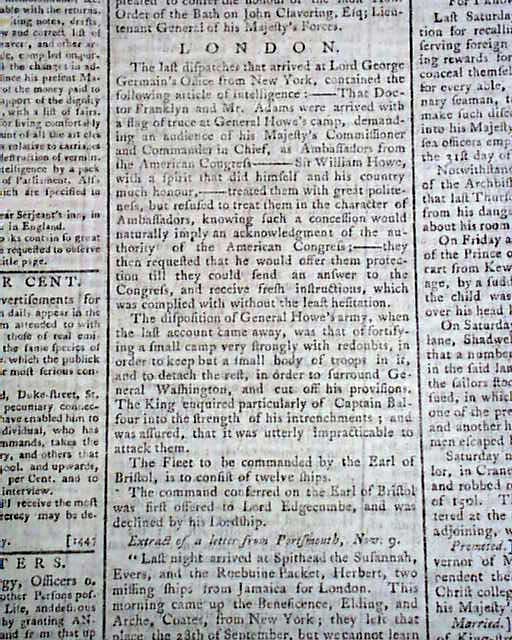 A woman set fire to New York? Franklin & Adams with a flag of truce...


THE LONDON EVENING POST, England, Nov. 12, 1776  The front page has a report mentioning: "...the following article of intelligence: That Doctor Franklyn [Franklin] and Mr. Adams were arrived with a flag of truce at General Howe's camp demanding an audience of his Majesty's Commissioner and Commander in Chief, as Ambassadors from the American Congress..." with more on this.
Inside has a report from New York noting: "...that Gen. Howe ha separated his army into three divisions, one he left at New York, another at Long Island, and with the remainder he designed to endeavour to take possession of one of the Jerseys." with more on this.
Also an intriguing report on the origin of the historic New York fire, its origin still a point of controversy: "...the city of New York was fired by a woman...One miserable woman, with her single arm, did that which an army of a 100,000 men could not do. This miserable being was found in a cellar, buried in combustibles in order to fire New York and die in its ashes..." with a bit more.
The back page has a lengthy letter: "To Lord North" concerning the American War, too much to detail here but one point notes; "...Great stress is laid upon the declaration of independence. In the situation of American & considering each progressive step...could any man in his sober senses expect any thing less?...".
The bkpg. also has a report concerning the Declaration by the Howes in attempting to persuade individual Americans to abandon the American cause and rejoin the King's favor.
Four pages, never-trimmed margins, red tax stamp on page 3, nice condition.