Home > Back to Search Results > George Washington's signed response... Where to set the nation&#x27;s capital?
Click image to enlarge 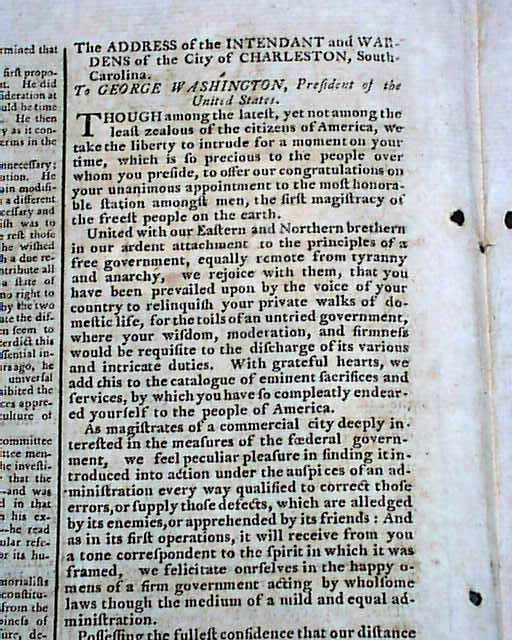 George Washington's signed response... Where to set the nation&#x27;s capital?


GAZETTE OF THE UNITED STATES, New York, March 20, 1790  Pages 1 & 2 have continuing coverage of discussions in Congress from the first year of the government's existence.
Page 2 has an address from the "Intendant and Wardens of the City of Charleston, South Carolina to George Washington..." congratulating him on his "unanimous appointment" to "...the first magistracy of the freest people on the earth...", followed by his gracious reply, signed in type: G. Washington.
The back page has an interesting letter concerning where to create the nation's capital, discussing various alternatives. Included are: "...large Bay of Chesapeake for this purpose. The great number of conveniences...which would inevitably attend fixing the capital of the United States near the mouth of such a large river & on the head of the extensive a Bay..." and more.
Four pages, wide, never-trimmed margins, good condition.