Home > Back to Search Results > Senate congratulates Washington on his election... Washington's letter to the Lutherans...
Click image to enlarge 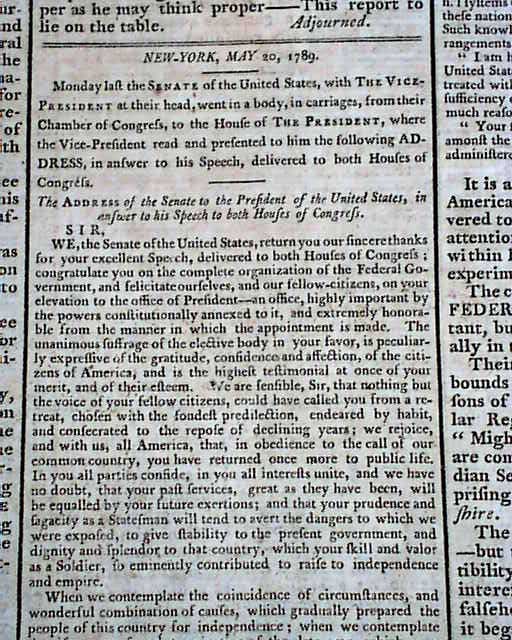 Senate congratulates Washington on his election... Washington's letter to the Lutherans...


GAZETTE OF THE UNITED STATES, New York, May 20, 1789  On pg. 2 under "Proceedings of Congress" are the proceedings the House of Representative from the first session of the first Congress under the Constitution. This Congressional coverage carries over to page 3 where there is interesting discussion from May 19 concerning the various Cabinet posts, including: "...the first object was the establishment of an office of Finance...proposed a resolve as an amendment that ht should first be determined how many departments there should be, and proposed a resolution that there should be three, viz. The Department of Foreign Affairs, the Department of the Treasury, and The War Department. To these it was proposed by Mr. Vining to add a fourth, viz. The Secretary of the United States for the Domestic Department..." with much more on this.
On pg. 3 under "New York" is a report stating that on the previous Monday "...the Senate of the United States, with the Vice President at their head, went in a body, in carriages, from their Chamber of Congress, to the House of The President, where the Vice-President read and presented to him the following ADDRESS, in answer to his Speech, delivered to both Houses of Congress."
Hereafter is this historic first address of Congress to the President. The address begins: "WE, the Senate of the United States, return to you our sincere thanks for your excellent speech, delivered to both Houses of Congress; congratulate you on the complete organization of the Federal Government, and felicitate ourselves, and our fellow citizens, on your elevation to the office of the President..." and more, signed in type: John Adams (see for portions).
A gracious and humble reply from the President follows, and is signed in type: G. Washington.
There is also a report about the foreign impression of the new nation, and an extract of a letter concerning the election of Washington.
But perhaps the most significant content is the back page: "Address of Ministers, Church Wardens and Vestrymen of the German Lutheran Congregation in and near the City of Philadelphia, to His Excellency GEORGE WASHINGTON, President of the United States", which is followed by the President's reply, signed in type: G. Washington. A very notable letter.
Great to have this historical content in this title from what was the nation's capital at the time, and likewise was considered the main news source for any activity conducted by the federal government.
Four pages, never bound nor trimmed, light damp staining with toning at the margins.