Home > Back to Search Results > A witness to George Washington's 1789 inauguration...
Click image to enlarge 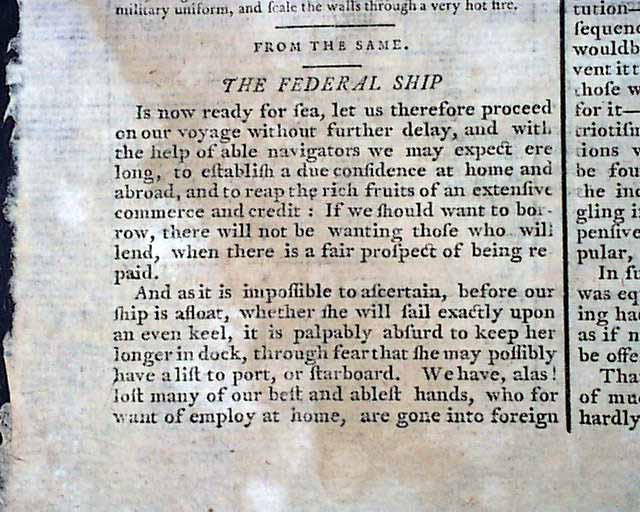 A witness to George Washington's 1789 inauguration...


GAZETTE OF THE UNITED STATES, New York, May 13, 1789  A significant and very early issue of this famous newspaper which was the mouthpiece of the new federal government.
Rufus Wilmot Griswold, author of "The Republican Court, or American Society of the Days of Washington", notes only one published eyewitness account of Washington's first inauguration in 1789, it first appearing in this very issue with the heading: "Extract of a Letter from New York, May 3".
See the photos for the full text of this terrific letter, which gives a great sense of the religious overtones & fervor of patriotism as the writer witnessed this exceedingly historic moment in the creation of the new federal government.
Portions include: "...the scene was solemn and awful, beyond description...in so great a degree, excite the public curiosity...the devout fervency with which he repeated the oath--and the reverential manner in which he bowed down & kissed the sacred volume--all these conspired to render it one of the most august and interesting spectacle ever exhibited on this globe. It seemed from the number of witnesses, to be a solemn appeal to Heaven and earth at once...that the gracious Ruler of the universe was looking down at that moment with peculiar complacency on an act...Under this impression, when the Chancellor pronounced, in a very feeling manner, 'Long live George Washington', my sensibility was wound up to such a pitch, that I could do no more than wave my hat with the rest, without the power of joining in the repeated acclamations which rent the air.' "
An extremely historic and rare newspaper with this noteworthy content.
This report is followed by an address from the city of New York to the President, with his reply signed in type: George Washington.
This is followed by a report from Boston which notes: "We have just received from New York the Speech of our POLITICAL FATHER to both Houses of Congress..." referring to Washington's inaugural address, with some quotes from it. This is followed by other items concerning Washington, as well as a curious notice headed: "The President's Household" concerning the servants & others employed by the President.
Page 2 contains an interesting article headed: "The Federal Ship" concerning the beginning of the new federal government. There is also a poem titled: "To the President of the United States (see), followed by much reporting from Congress.
Four pages, light damp staining, some toning at the margins, good condition.