Home > Back to Search Results > Discontent in Parliament over the American war...
Click image to enlarge 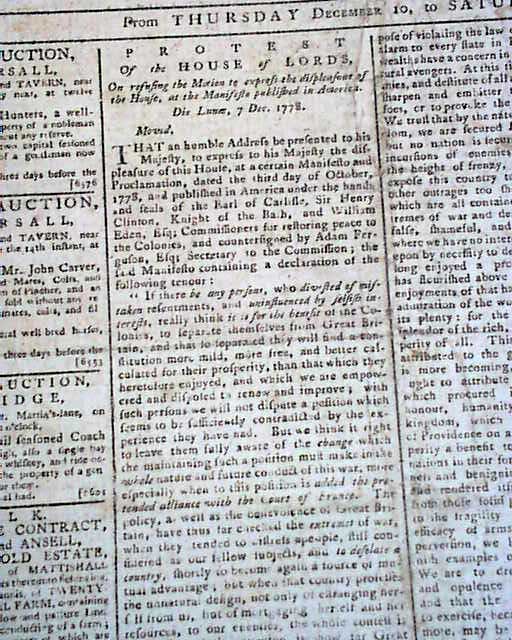 Discontent in Parliament over the American war...


THE LONDON EVENING POST, England, Dec. 12, 1778  Nearly 2 front page columns are taken up with the: "Protest Of the House of Lords on Refusing the Motion to Express the Displeasure of this House at the Manifesto published in America."
This Manifesto concerns the document by 3 commissioners from England appointed to negotiate with Congress in order to deter an alliance between the colonies and France. The document promised pardon to those withdrawing from the war by November 11.
Page 3 continues with discussion in the House of Commons with some talk of the American situation, one bit noting: "...a principal reason was to discover if we meant to send any more of our regular troops to America. He had heard that we meant still to pursue that dark bloody business, & that some of the best, bravest, and most veteran regiments now in Britain were to be sent their immediately...".
The back page has an item concerning a critical examination of the British officers by the Ministry.
Four pages, folio size, never-trimmed margins, red tax stamp on page 3, nice condition.