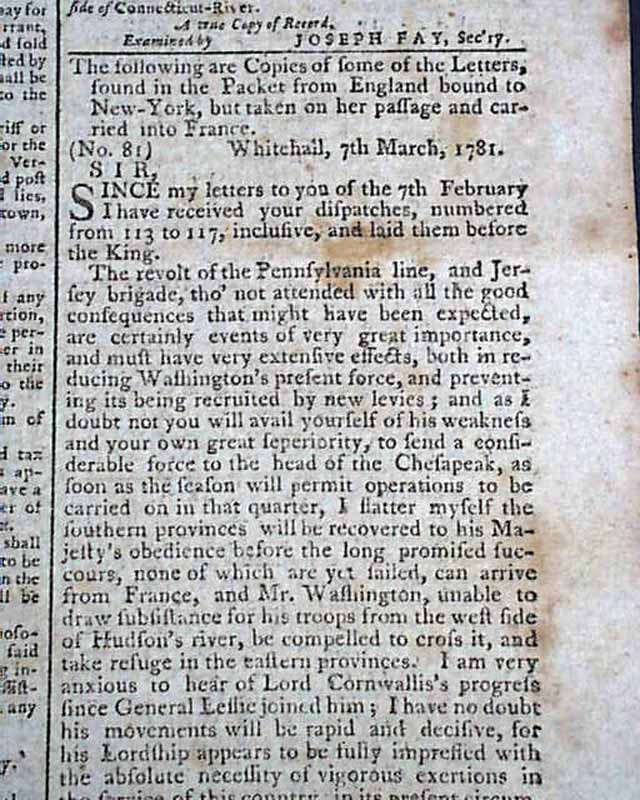 
THE CONNECTICUT COURANT & WEEKLY INTELLIGENCER, Hartford, August 14, 1781  The front page has news from captured correspondence including: "The revolt of the Pennsylvania line & Jersey brigade...are certainly events of very great importance, & must have very extensive effects both in reducing Washington's present force & preventing its being recruited by new levies..." and: "...I flatter myself the southern provinces will be recovered to his Majesty obedience before the long promised succors, none of which are yet sailed, can arrive from France, & Mr. Washington, unable to draw subsistence for his  troops from the west side of the Hudson's river, be compelled to cross it & take refuge in the eastern provinces..." plus talk of General Benedict Arnold, Lord Cornwallis, and General Lee. This report carries over to page 2 where it is signed in type by: Geo. Germain.
This is followed by a letter to Sir Henry Clinton questioning much on the recent military developments in America. A few items include: "...How vain & delusory are the fairest prospects when founded only in a bewildered imagination...How could his Lordship conclude from hence that General Washington would be confined to the eastward of the Hudson river?...America knows, & Europe will know, that the forces of the United States...have reduced nearly all the posts established by the British in the Carolinas and Georgia...The army under Lord Cornwallis in the state of Virginia, instead of gaining laurels from the victory or conquest, has taken the precaution of acting upon the defensive...It is acknowledged that General Washington is on the east of the Hudson river but he there commands an army of veterans...The objects of his operations are such as will soon convince the British ministry themselves of the futility of their claims to the United States..." and more.
Page 2 has a great account of the historic Battle of Green Spring, Cornwallis' last major battle before Yorktown.
Much good war content carries into page 3 including a letter from Richmond, then a report from Baltimore beginning: "The British, it is reported, have evacuated & destroyed their fortifications at Ninety-Six..." and so much more.
Four pages, ornate lettering in the masthead, a bit of foxing, very nice condition.