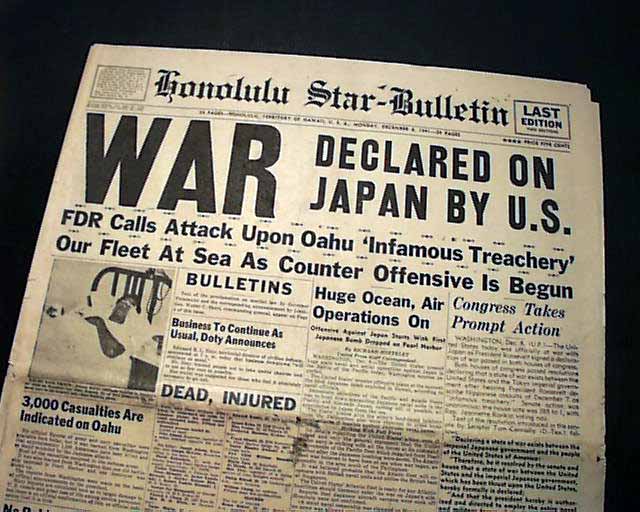 
HONOLULU STAR-BULLETIN,  Honolulu, Territory of Hawaii, Dec. 8, 1941 "Last Edition"  The very famous Dec. 7 issue of this paper has been reprinted so many times that genuine issues are difficult to find, although they do exist.
Equally as rare--if not more so--is the last edition of the December 8 issue which has a very similar headline, with the huge & bold: "WAR" of identical size & location as found on the December 7 issue, but  now followed by: " Declared On Japan By U.S." with various related subheads as seen in the photos below. Not surprisingly there are various reports on the bombing of Pearl Harbor on some inside pages, with much of page 3 taken up with "Pictures Around City Showing Bomb Damage", and page 2 has a great wealth of war-related headlines.
This would certainly be the best newspaper to have for reports on the bombing of Pearl Harbor. And could there be a better issue for the announcement that war has been declared than from the city where America's entry in the war began?
Complete with both sections & all 24 pages, some minor ink stains to the front page, minimal margin wear, generally nice condition.