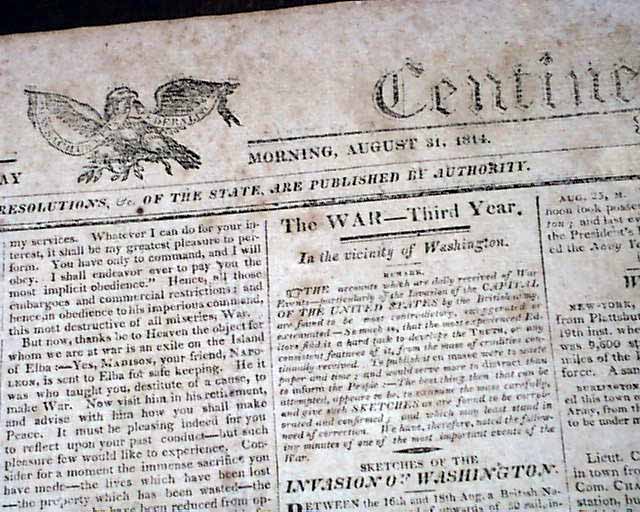 * Burning of Washington (capture)
* British attack on the capital of U.S.

The front page has some significant content from the War of 1812 including: "The War--Third Year" "In the Vicinity of Washington" "Sketches of the Invasion of Washington" which provides a time line as to the advance by the British, including: "Aug. 20-21. The British began their march towards Washington...Aug. 22...The public papers began to be removed from Washington...Aug. 24...The enemy continue to advance & our army under Gen. W. falling back on the city..." with much more. Also: "Battle of Bladensburg" which has much good battle detail.
Also: "War on the Lakes" "From the Niagara Border". But the most significant content is the latest information as presented on page 2, with: "Washington City Taken" which contains the latest advices from the mail, noting: "...march towards the Capital of the United States--and the capture of that place on the 24th after an inconsiderable resistance...". Several dispatches are included, one noting: "Intelligence has reached us that a severe & desperate conflict was maintained...and the British in possession of Washington..." with more. Also on pg. 2 is a report headed: "Most Important New" which begins: "The City of Washington--the seat of Government, and a great naval, military and scientific depot--has fallen into the hands of the Enemy!..." with some details (see). Yet another report from Baltimore notes: "You have unquestionably have heard of the capture of Washington City...and the occupation of Georgetown by the British..." with more.
A very significant issue on the War of 1812. Four pages, a bit irregular at the spine margin, nice condition.