Home > Back to Search Results > The Stock Market Crash of 1929...
Click image to enlarge 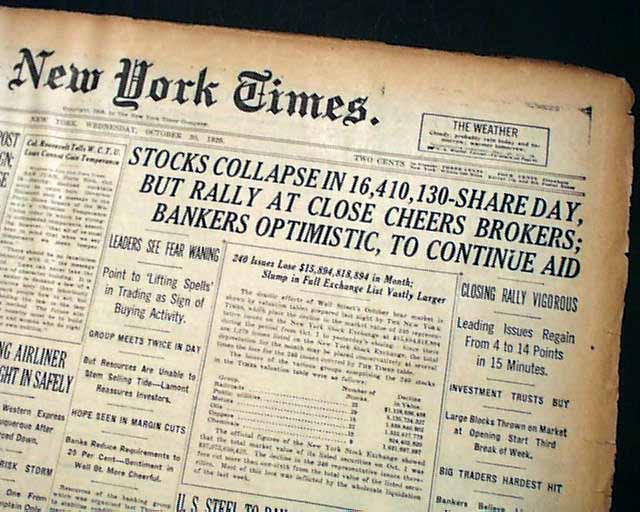 Of the several dates of the prestigious "Times" which reported the Stock Market Crash in late October this ranks among the best.  The four column, three line headline at the top of the front page reads: "STOCKS COLLAPSE IN 16,410,030 SHARE DAY BUT RALLY AT CLOSE CHEERS BROKERS; BANKERS OPTIMISTIC, TO CONTINUE AID". There are related subheads as well reading: "Leaders See Fear Waning" "Closing Rally Vigorous" "Investment Trusts Buy" "Large Blocks Thrown on Market at Opening Start Third Break of Week" "Big Traders Hardest Hit" and more.
The reporting carries over to page 2 as well with a large headline: "Bank and Trust Stock Prices Crumble in Record Trading" plus many related subheads on this page and related reports on other pages as well. A great wealth of reporting of this infamous event.
Of the thousands of newspapers in print in the United States in 1929, the "New York Times" would rank among the most desired in reporting not just this 1929 Crash, but any historic financial report as Wall Street was located in New York City. Particularly desired are the words "Stocks Collapse", which rarely appeared in newspaper reports of this event.
This is the complete 52 page issue, disbound, minor browning at the  margins, nice condition.
A rare opportunity for an historic and very desired newspaper.