Home > Back to Search Results > On ratifying the Constitution... Building the capitol in New York...
Click image to enlarge 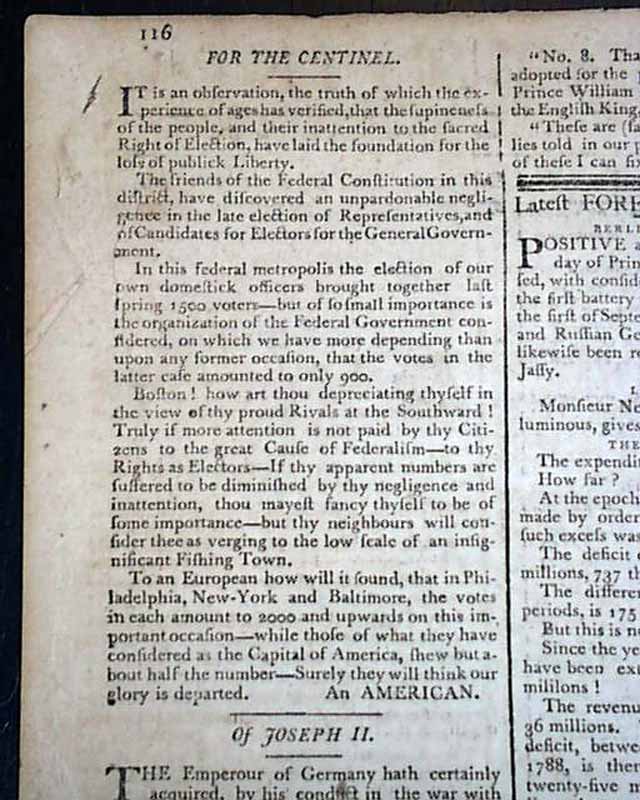 On ratifying the Constitution... Building the capitol in New York...


THE MASSACHUSETTS CENTINEL, Boston, Dec. 24, 1788  Page 2 has an interesting article concerning voter apathy & low voter turnout.
Page 3 has a letter from Fort Harmar concerning a treaty with Indians. Also: "Notwithstanding the Constitution has been ratified by eleven states--has been in part organized--and is speedily to be put into operations---the antifederal writers in Phila. still 'blow the loud horn' against it..." with more.
A report lists the result of votes for Representatives to the new federal government, as well as a report: "We learn from New York that the sum already subscribed for the building intended for the accommodation of  the new Congress, amounts to 9000 pounds. The room for the Senate is nearly completed. The whole building will cost near 15,000 pds. and will be 165 feet long."
Four pages, very nice condition.