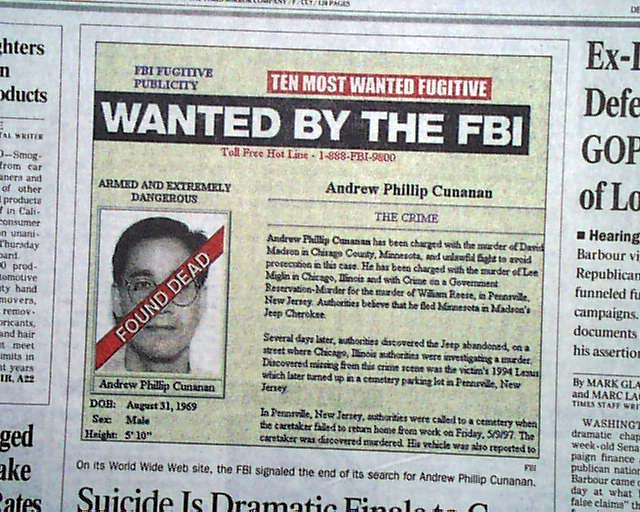 The front page has considerable coverage telling of the death of serial killer Andrew Phillip Cunanan, who had been targeting wealthy and/or famous homosexual men. The last person he murdered before committing suicide was the famous Italian designer, Giovanni Versace. In all it has been confirmed he killed 5 men, but it is believed he may have murdered 10 or more. Headlines/subheads include: TEN MOST WANTED FUGITIVE," "WANTED BY THE FBI," "Suicide Is Dramtic Finale to Case," "Fugitive's Death Leaves a Trail of Contradictions," and more. His killing spree began in April of the same year with the murder of his close friend Jeffrey Trail, by means of a claw hammer. The coverage continues on inside pages which includes additional photos. Page E4 (Life & Style Section) includes an article: "Versace Retains a Place at the Table."


Included are the 1st five sections (Front, Valley/Local, Business, and Sports), which are in very good condition.