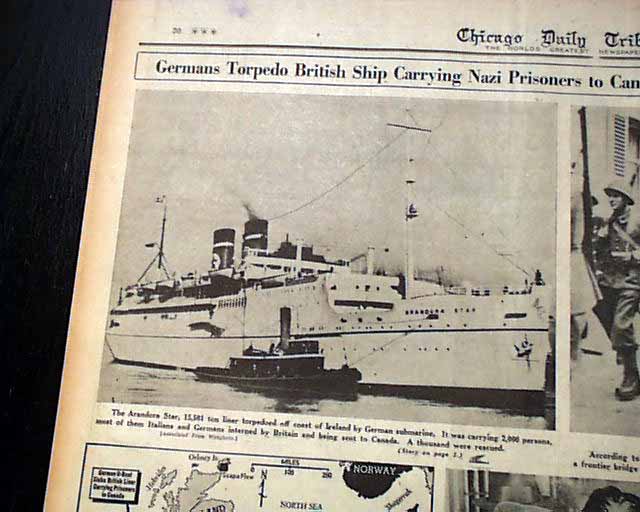 The front page has a six column headline: "Nazis Torpedo Prison Ship; 1,000 Perish" with subheads. (see) Photo of the Arandora Star is on the back page. Always nice to have notable events in history reported in this World famous publication.
Complete with all 30 pages, light toning at the margins, small library stamp within the masthead, small binding holes along the spine, generally nice.

wikipedia notes: On July 2, 1940, having left Liverpool unescorted the day before, under the command of Edgar Wallace Moulton, she was bound for St. John's, Newfoundland and Labrador and Canadian internment camps with nearly 1,500 German and Italian internees, including 86 POWs, being transported from Britain. Most were elderly Italians, who were resident in Britain. The ship was bearing no Red Cross sign, which could have shown that she was carrying prisoners, and especially civilians.

At 6.58 AM off the northwest coast of Ireland, she was struck by a torpedo from the German submarine U-47, commanded by U-Boat ace Günther Prien. It is assumed that U-47 mistook her grey wartime livery for that of an armed merchant cruiser. U-47 fired its single damaged torpedo at Arandora Star. All power was lost at once, and thirty five minutes after the torpedo impact, Arandora Star sank. Over eight hundred lives were lost.

"I could see hundreds of men cling to the ship. They were like ants and then the ship went up at one end and slid rapidly down, taking the men with her ... ... Many men had broken their necks jumping or diving into the water. Others injured themselves by landing on drifting wreckage and floating debris near the sinking ship"