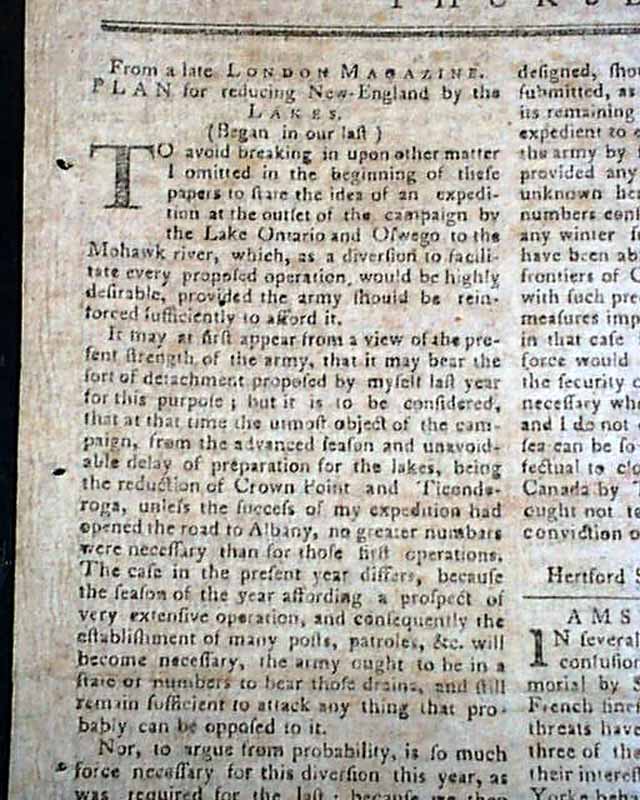 
THE AMERICAN JOURNAL & GENERAL ADVERTISER, Providence, Rhode Island, December 23, 1779  A truly rare title from the Revolutionary War, as it lasted for less than 1 1/2 years from March, 1779 to August, 1781. This issue is volume 1, number 41.
The front page begins with the conclusion of: "A Plan for Reducing New England by the Lakes" signed in type by: J. Burgoyne.
Page 2 has a report prefaced with: "The following are some of the reasons that  have been assigned why the assault on Savannah did ot succeed...", they taking half a column. Also a small bit concerning Ben Franklin.
A report from Trenton mentions a loan from France and the States of Holland, result of a treaty in which both are supporting of the colonies in their efforts against England.  Another item from New York mentions: "...that 4000 troops lately embarked there a second time & were upon the point of sailing for Carolina or Georgia, but having intelligence that a part of Count D'Estaing's fleet was still on that coast, they prudently reimbarked."
A report from the General assembly of Rhode Island details an Act concerning desertions from the colonial army and penalties for harboring deserters, etc. Page 3 has a nice for reprinting: "Observations on the American Revolution" which includes the beginning: "The efforts of Great Britain to reduce these United States being now  almost  brought to a period; it is proper  that the citizens of America  should look over the ground they have trodden..." and at its conclusion: "...Considering our present situation & connections, we cannot but be sensible that the Independence of America is fully secured...".
Four pages, wide, never-trimmed margins, minor loss to a lower corner and small worm hole to the back leaf, some period doodling to pg. 1 margins, generally good condition.