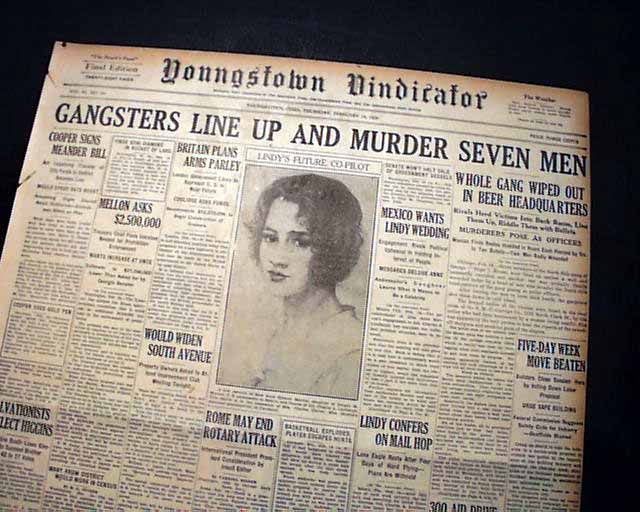 The front page features a great banner headline reporting the historic St. Valentine's Day Massacre: "GANGSTERS LINE UP AND MURDER SEVEN MEN".
Subheads include: "Whole Gang Wiped Out In Beer Headquarters" "Rivals Herd Victims Into Back Room, Line Them Up, Riddle Them with Bullets" "Murderers Pose As Officers" "Woman Finds Bodies Huddled in Room Each Pierced by Six to Ten Bullets--Two Men Badly Wounded".
This was one of the more infamous events of the gangster era, when Al Capone's men murdered the North Side gang members headed by rival gangster  'Bugs' Moran.
Complete in 30 pages, disbound, bit close-trimmed at the right margin affects no text on pg. 1 but does a bit on pgs. 2 & 4, nothing relating to the noted report. A few small binding slits along the spine, generally nice.