Home > Back to Search Results > Death of Babe Ruth...
Click image to enlarge 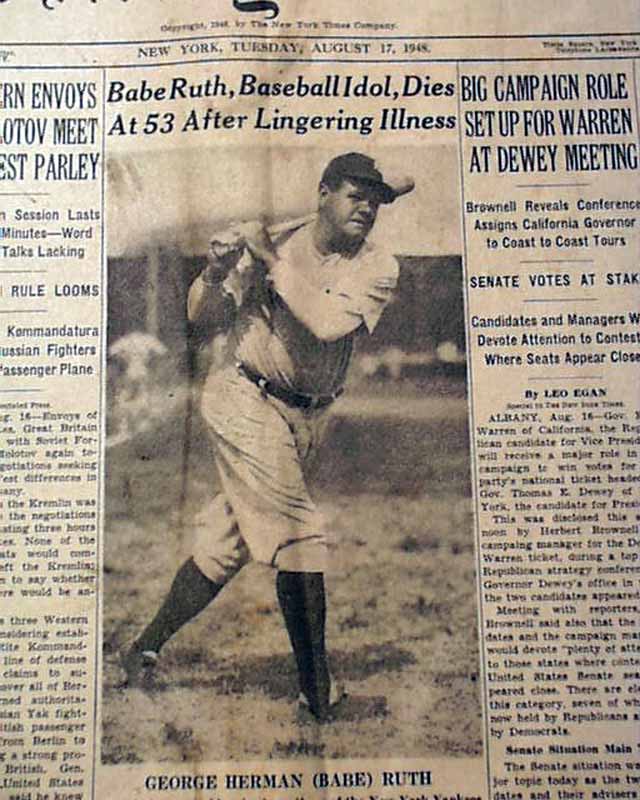 The top of the front page features a nice full-figure photo of Babe Ruth, headed: "Babe Ruth, Baseball Idol, Dies at 53 After Lingering Illness" beneath which is: "Famous Diamond Star Fought Losing Battle Against Cancer for 2 Years--End Comes Suddenly After Encouraging Rally".
But even better coverage is on pages 14 & 15, each featuring a banner headline: "Babe Ruth, Baseball's Great Star and Idol of Children, Had A Career Both Dramatic and Bizarre" as well as: "Ruth Set Fifty-four Major League Records and Ten Additional Marks in American Circuit".
The pages also include 5 photos of him, the largest showing him at "Babe Ruth Day" at Yankee Stadium in 1947. Also one of him in 1914 as a pitcher for the Boston Red Sox.
Terrific to have this very notable report in the New York Times, his hometown newspaper during his stellar career.
Complete in 44 pages, minimal wear at the fold & margins, good condition.