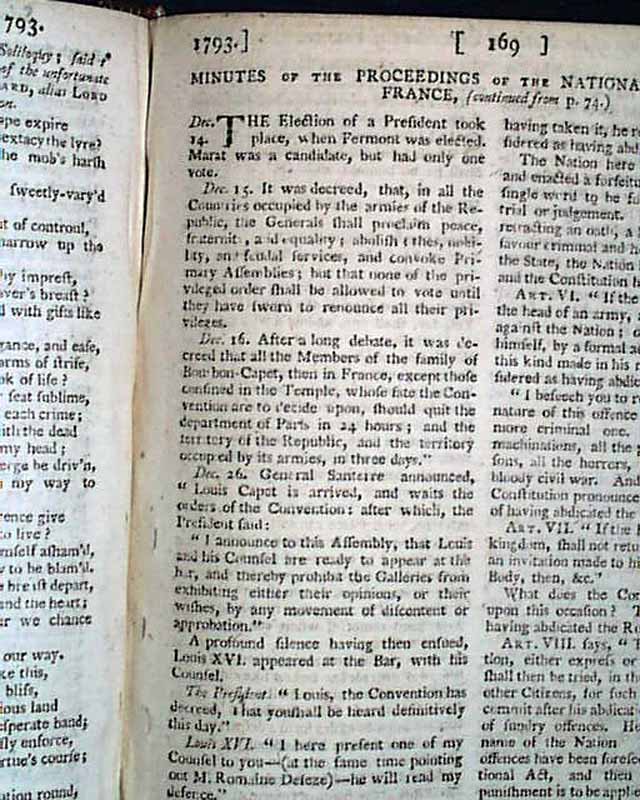 Item # 657803 THE GENTLEMAN'S MAGAZINE, London, February, 1793  There are several items of interest, one of which is several pages on the: "Minutes of the Proceedings of the National Convention of France" with much text on what should be the fate of Louis XVI (see for portions).
This is followed by: "The Last Will and Testament of His Late Most Christian Majesty" which has near the beginning: "In the name of the Holy Trinity...This day, Dec. 21, 1792, I Louis XVI King of France, having been for more than four months shut up with my family in the Tower of the Temple at Paris...deprived of every king of communication with my family..." with the full text taking over 1 1/2 pages and signed by him in type: Louis and Baudrais (see).
Further on is a report headed "America" with a Philadelphia, Jan. 4 dateline which begins: "Our worthy President has been unanimously re-elected; not a voice through all the continent against him. Our Vice-president has also been re-elected...". There is also a report beginning: "Blanchard, the celebrated aeronaut, is now here. Though the ballooning mania is not so strong here as it was some years ago in the old world...on the seventh of January last, he was to ascend from this place..." with a bit more (see).
Yet another noteworthy item is the extract of a letter written by Major [Frances] Grose from Botany Bay, reporting on his first impressions of the conditions and land in and around Sydney upon his arrival with his family to assume the role as the 1st Lieutenant Governor of Botany Bay.
All 3 full page plates called for are present.
Complete in 96 pages, 5 by 8 1/4 inches, full title/contents page with an engraving of St. John's Gate, great condition.