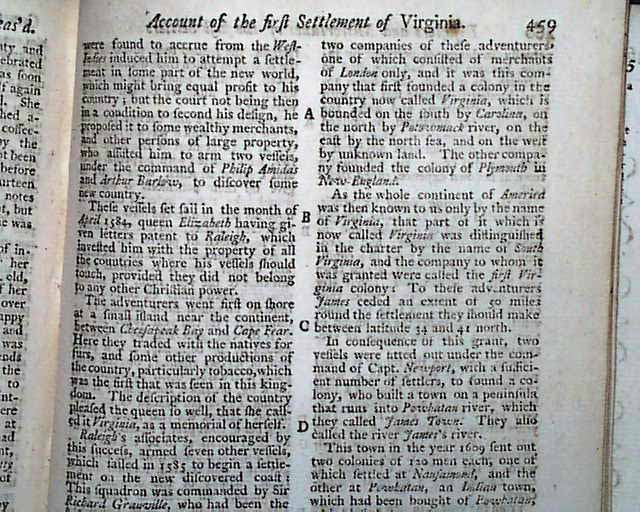 Item # 657792 THE GENTLEMAN'S MAGAZINE, London, January, 1753  Included in the issue is a half page illustration of: "An Instrument called the Trajectorium Lunare" for delineating the path of the earth and the moon (see), which includes descriptive text as well. There is a half page print of: "Remains of an Ancient Temple in Ireland" with a related article; "Learned Remarks on the Rebus"; a full page plate showing "A View & Description of the Grotto del Cane" near Naples which also has prints of 2 unusual fish (see); "Several Extraordinary Baths in Italy"; a full page plate of a: "View of an Ancient Altar & Mount in Minorca" with a related article.
Near  the back is an article which foretells the French & Indian War, beginning: "The differences between the court of London and that of France about the limits of the two nations in America & the neutral islands cannot yet be brought to a happy conclusion..." (see)
All the plates called for are present, several noted above, but also including a nearly full page of "The Little Thrush" bird on "The Dahoon Holly" plant.
Complete in 56 pages, 5 by 8 1/4 includes, full title/contents page with an engraving of St. John's Gate, in very good condition.