Home > Back to Search Results > Revival of Christianity...
Click image to enlarge 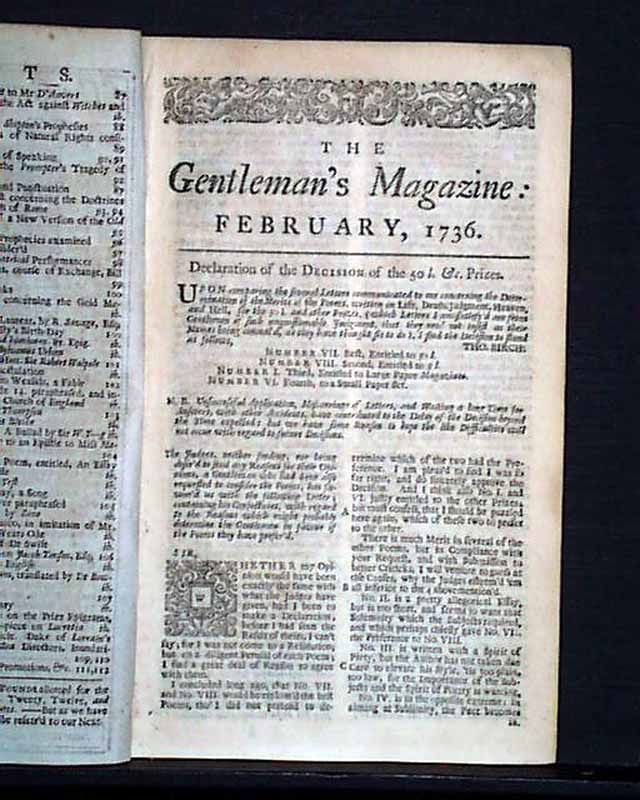 Item # 657762 THE GENTLEMAN'S MAGAZINE, London, February, 1736   Among the articles noted in the table of contents are: "Seaman's Opinion of a Standing Army" "Constantine's Advice to the Council of Nice" "Col. Pride sent by Cromwell to blockade the House of Commons" "Calvin's Declaration" "The Discreet Wife--Her Method to Reform her Husband" "In "Praise of Female Wit"  "The Communion, no Test in New England" "Proposals for Revival of Christianity" "For Repealing the Act against Witches & Conjurers" & more.
Near the back is a section headed: "Historical Chronicle" with news from England & other parts of Europe.
Complete in 56 pages with full title/index page featuring an engraving of St. John's Gate, measures 5 by 8 inches, even toning to the front cover, otherwise in very good condition.
This is from just the sixth year of this magazine's existence & before any maps or plates were included.