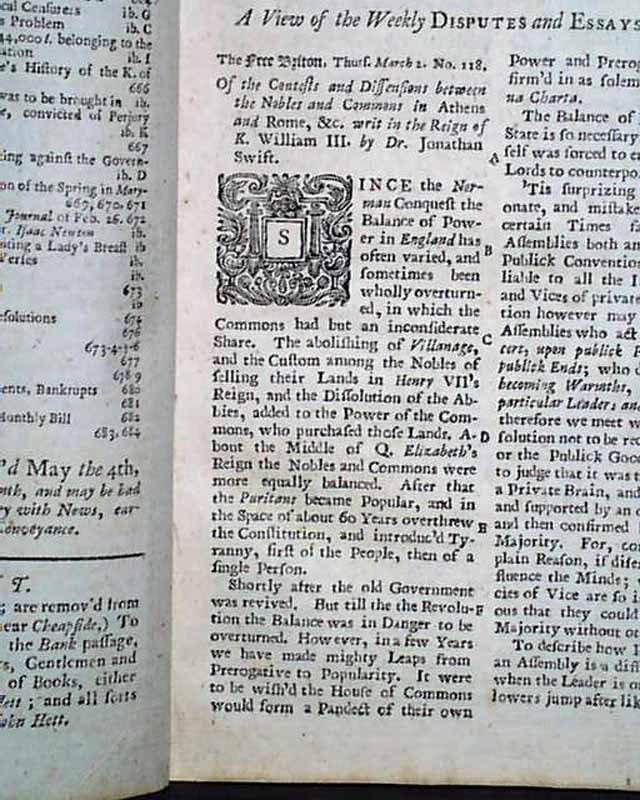 Item # 657761 THE GENTLEMAN'S MAGAZINE, London, March, 1732  The first 29 pages are taken up with: "A View of the Weekly disputes  & Essays in This Month" which has various reports from the many newspapers in England including the Daily Courant, Universal Spectator, Applebee's Journal, Weekly Register, London Journal, Fog's Journal, The Craftsman, The Free Briton, and more. These newspapers report on a wide range of topics including: "On Political Dreaming" "Of Study & Punning" "War with Priestcraft" & much more. This is followed by a two page poem: "Description of the Spring - A Journey from Patapsco in Maryland to Annapolis, April 4, 1730" and then a poem: "To the Memory of Sir Isaac Newton Translated from the French".

Near the back is the "Monthly Intelligencer" which has an interesting report on various crimes and their sentences. In the "Foreign Advices" is an interesting & detailed account of trouble with vampires, noting in part:"...From Medreyga in Hungary, that certain dead bodies called vampyres, had kill'd several persons by sucking out all their blood...they were perswaded he was a vampyre, and according to custom, drove a stake thro' his heart, at which he gave a horrid groan. They burnt his body to ashes..." with more (see images).

Complete in 46 pages, 5 by 8 inches with a full title/contents, in very good condition. There were no plates or maps in issues of this early date.