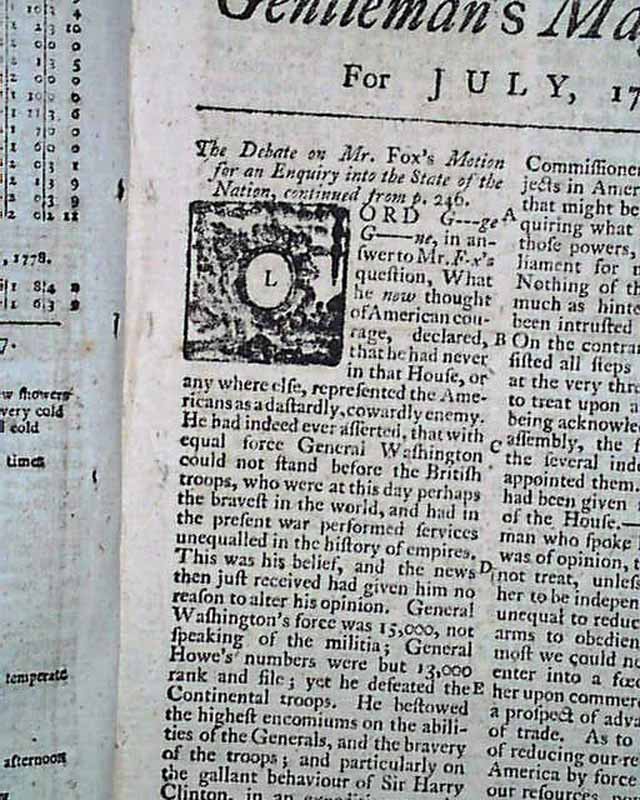 Item # 657756 THE GENTLEMAN'S MAGAZINE, London, July, 1778
The first article is a "...Debate...on Enquiry into the State of the Nation..." continued from a previous issue and has much on the Revolutionary War, including: "...that with equal force General Washington could not stand before the British troops, who were at this day perhaps the bravest in the world...General Washington's force was 15,000, not speaking of the militia; General Howe's numbers were but 13,000 rank & file, yet he defeated the Continental troops...As to the practicability of reducing our rebellious subjects in America by force of arms...he began to despair of success if they should continue united..." and so much more. This text continues for 5 1/2 pages.
Near the back is over half a page of: "American Affairs" which includes a great letter signed by Jonathan Trumbull which reads in part: "...the unprovoked commencement of hostilities; the barbarous inhumanity which has marked the prosecution of the war; the insolence which displays itself on every petty advantage...are insuperable bars to the very idea of concluding a peace with Great Britain on any other conditions than the most absolute & perfect independence....". Also a brief yet significant note: "Gen. Lee, Col. Ethan Allen, and seven field officers, are fully exchanged." (see)
Unrelated to the war is a two page article: "Experiments & Observations on Electricity" which includes mention of Ben Franklin (see). And there is yet another report concerning events in America (see).
Plate called for is present.
Complete in 48 pages, 5 1/4 by 8 1/2 inches, full title/contents page with an engraving of St. John's Gate, very nice condition.