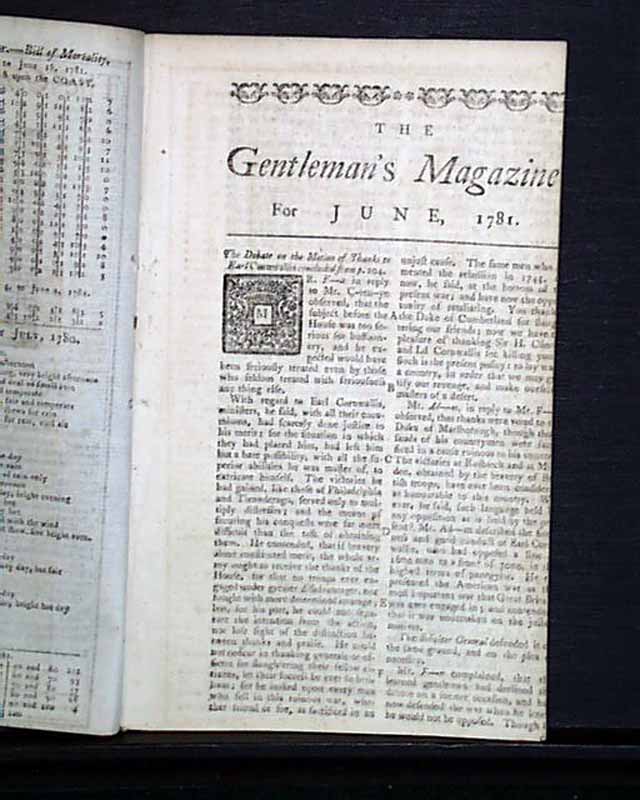 Item # 657748 GENTLEMAN'S MAGAZINE, London, June, 1781  The issue begins with a continuation on the "Debate on the Motion of Thanks to Earl Cornwallis", mentioning: "...the victories he had gained, like those of Phila. & Ticonderoga, served only to multiply distresses..." with much more (see for portions).
Under the "Historical Chronicle" near the back is a lengthy & detailed account of Cornwallis' intentions for the winter campaign in the Carolinas and other military affairs in the area, signed by him in type: Cornwallis.
This is followed by a very historic--and again lengthy & detailed--letter signed by Cornwallis on his victory at the battle of Guilford Court House in North Carolina. It was a bittersweet victory, as he suffered such severe losses that he abandoned his campaign to establish British control over the Carolinas.
There are two more letters signed by Cornwallis as well, both relating to military events in the South. Further on is a nice & detailed letter signed by: B. Arnold, concerning events in Virginia (see for portions).
The plate called for is lacking.
Complete in 50 pages with full title/contents page, 5 by 8 inches, close-trimmed on the first two leaves, otherwise in very nice condition.