Home > Back to Search Results > Colonists will defend "the rights & liberties of America"...
Click image to enlarge 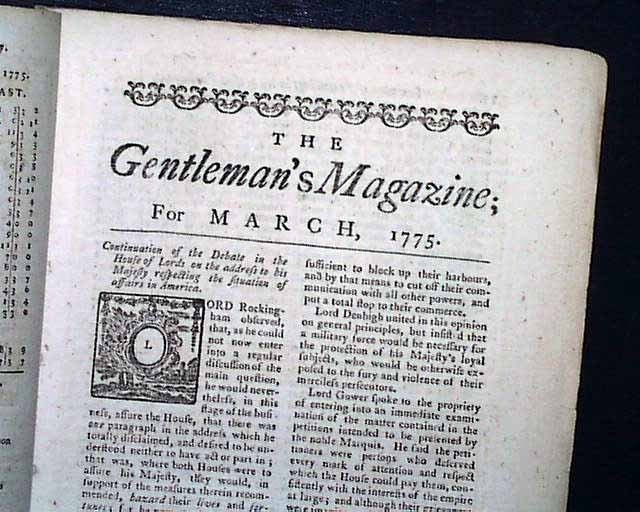 Colonists will defend "the rights & liberties of America"...

Item # 657746 GENTLEMAN'S MAGAZINE, London, March, 1775  The first five pages contain a lengthy report on: "...address to his Majesty respecting the Situation of Affairs in America." which includes: "...The army might proceed to hostilities, it might be defeated, the Americans might prevail, we might be for ever stripped of the sovereignty of that country..." with so much more. There is a review of a publication: "Taxation No Tyranny: an Answer to the Resolutions and Address of the American Congress".
There is over a full page on: "Account of the Proceedings of the American Colonists since the Passing the Boston Port Bill" continued from the previous issue. Included is a report datelined "Williamsburgh, Virginia" which has: "...we resolve that we will exert every power within us for the defence of American liberty, and for the support of her just rights & privileges...when regularly called forth by the unanimous voice of our countrymen..." followed by a report from Philadelphia which notes: "...humble & loyal petition of the Continental Congress to his Most Gracious Majesty should be disregarded...instead of redressing our grievances, should determine by force to effect a submission to the late arbitrary acts of the British Parliament...we hold it our indispensable duty to resist such force & at every hazard to defend the rights & liberties of America.", with more to be continued in a future issue.
Another page notes: "The Crisis, No. III, and a pamphlet entitled 'The Present Crisis with respect to America', were both burnt at the Royal Exchange..." with more (see).
Lacking both plates called for.
Complete in 48 pages, full title/contents page featuring an engraving of St. John's Gate, 5 3/4 by 9 inches, wide margins, otherwise in good condition.

A very nice and extremely popular magazine from the "mother country" just before the outbreak of the Revolutionary War. This was the first periodical to use the word "magazine" in its title, having begun in 1731 and lasting until 1907.