Home > Back to Search Results > Very early on the Mormons...
Click image to enlarge 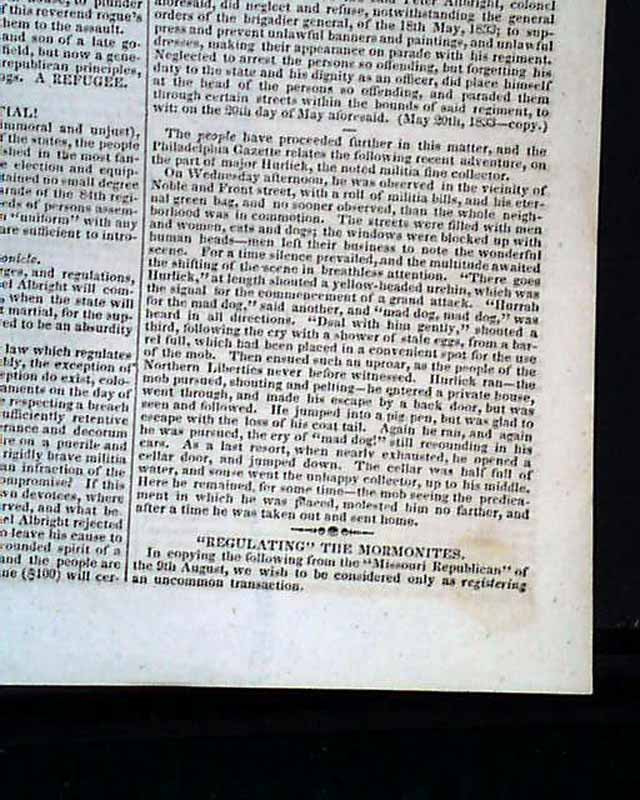 Very early on the Mormons...


NILES' NATIONAL REGISTER, Baltimore, Sept. 14, 1833  This small size newspaper began in 1811 and was a prime source for national political news of the first half of the19th century. As noted in Wikipedia, this title: "...(was) one of the most widely-circulated magazines in the United States...Devoted primarily to politics...considered an important source for the history of the period."

Inside has: "Regulating The Mormonites" which takes a bit more than the entire back page. This is a fascinating article which is prefaced with: "Some very extraordinary proceedings have recently taken place in Jackson county, in this state, against the sect of fanatics called Mormons..." which has much, much more, and includes 5 points which must be followed (see). Near the end is: "You have no doubt heard of the Mormonites. A few days since, the people residing in & near their village on the Missouri became exasperated at some specimens of their predatory habits, & proceeding in a body to their village, demolished their printing establishment & the dwelling of their high priest & inflicted considerable injury upon the persons & property of the whole brotherhood. The high priest was tarred & feathered..." and more (see).

Not only is this an interesting & lengthy account of persecution of the Mormons, but it is an extremely early report on them as well.