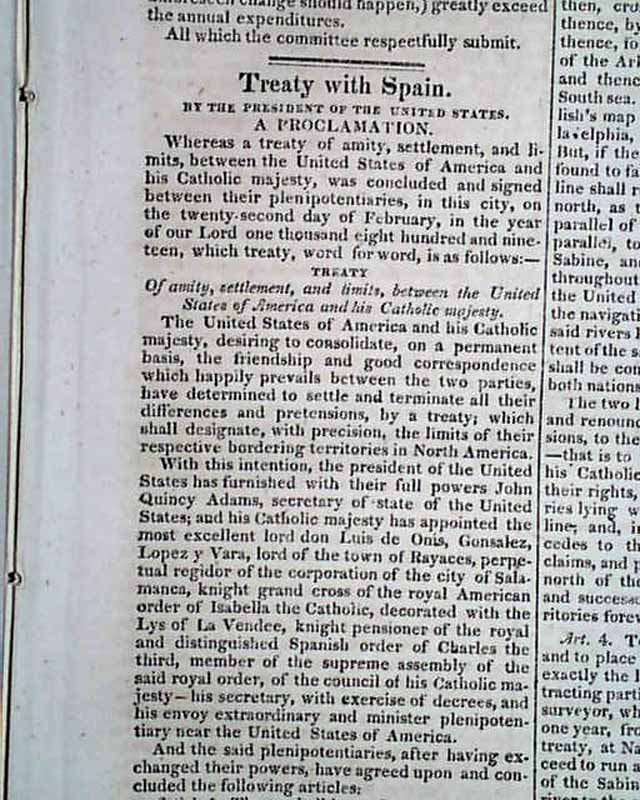 
NILES' WEEKLY REGISTER, Baltimore, March 17, 1821  Inside has close to six pages headed: "Treaty With Spain - By the President of the United States - A PROCLAMATION". This is more commonly known as the Adams-Onis Treaty, or the Florida Treaty, wherein Spain gave Florida to the United States and set a boundary between the United States and Mexico (see hyperlink for details).
This is followed by: "An Act for Carrying into Execution the Treaty Between the United States and Spain...", being the Adams-Onis Treaty, signed in type by the President, James Monroe, on March 3, 1821. There is also another Act of Congress for fixing the military peace establishment of the United States, also signed in type: James Monroe.
Sixteen pages, 6 1/4 by 9 3/4 inches, very nice condition.
This small size newspaper began in 1811 and was a prime source for national political news of the first half of the 19th century. As noted in Wikipedia, this title: "...(was) one of the most widely-circulated magazines in the United States...Devoted primarily to politics...considered an important source for the history of the period."